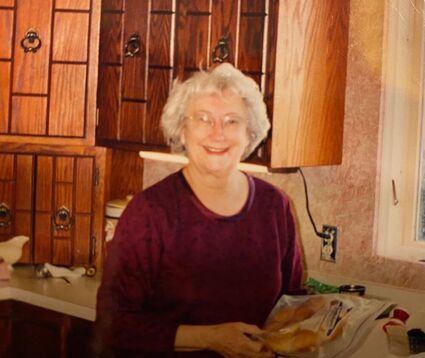 Luanna was born July 23, 1930, to Fred Henry and Estella (Wendland) Elling. She was followed eight years later by brother, Freddy, in 1938. Lu graduated from Rudyard High School in 1948 and went on to Northern Montana College and earned a teaching certificate.

She taught in Chinook for a couple of years before marrying Fred Rigg on December 27, 1952.  After that school year, she became a stay-at-home mom raising three boys. In the 1960s, Lu went back to Northern Montana College to get her teaching credentials up to date. She then taught at Hingham Public Schools until the consolidation with Rudyard school in 1982. Lu then was the librarian at Blue Sky School until the late 1980s.

Around that time, Lu and Fred, with brother, Freddy, and his wife, Elva, bought a piece of land on the south end of Lake Blaine where they built and shared a home. Fred and Lu built another home right next to the first one in the late 1990s and summered there. They golfed, had a coffee club with new Flathead Valley friends, and enjoyed the lake immensely. Lu made two hole-in-ones at a golf course just up the road from the lake.

Lu was diagnosed with Alzheimer's in 2005. Fred took care of her until it got to be too much for him. They moved to Wheat Country Assisted Living in Chester for a while, then to Liberty County Nursing Home, where Fred passed in 2015.

She is preceded in death by parents, Fred and Estella; nephew, Glen Elling; and in-laws, Otto and Charlotte Rigg.

Memorial services will be held Saturday, January 29, at 10 a.m .at New Beginnings Lutheran Church in Rudyard.

Memorials can be made to New Beginning Lutheran Church.

Condolences can be made to http://www.asperfh.com .