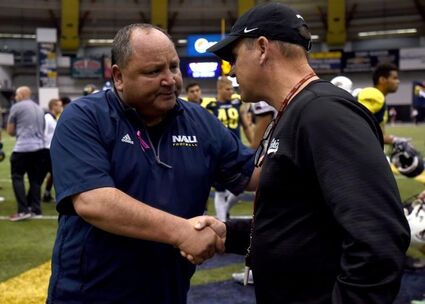 Jerome Souers, left, was hired as the new head coach for the Montana State University-Northern football team earlier this month. Souers coached Northern Arizona University for 21 years where he amassed 123 wins, the most in Big Sky history. He also served as the defensive coordinator for the University of Montana in the 1990s and was a member of the 1995 national championship team.

Jerome Souers needs little introduction to Treasure State football fans. Over the course of his 21 years coaching the Northern Arizona University football program, Souers won 123 games, the most in Big Sky history. He will now look to lead the Montana State University-Northern football program to success as he takes over the program this fall.

If he is going to turn it around, he knows he will need the help of the community.

“We need everybody that’s on campus to re-engage with the football program and be able to give me a chance to share the vision that we have for Montana State University-Northern,” Souers said a week after accepting the head coaching position at MSU-N. “I’m excited about the challenges of that and it really begins with reconnecting with the players and then the staff that comes in. That’s the first step in the whole thing.”

While he is originally from Eugene, Oregon, and he has spent a couple decades in Arizona, Souers is no stranger to the state of Montana. In the 1990s, he was the defensive coordinator for the University of Montana football team and was a member of their 1995 national championship team.

He also believes the community of Havre will be a fresh start.

From 2020 to 2021, Souers served as the defensive coordinator for Southern Oregon University in Ashland. But after the sudden passing of his wife Tracy in September of 2020, he began looking for new opportunities. When the opportunity arose to come back to coach in Montana, he could not pass up the chance.

“As cold as it can get in Montana, the warmth of the people overcomes any temperature,” Souers said. “It feels good to be home because that’s what it feels like to me.”

Some of his favorite football memories involve the state of Montana. Not only was winning the national championship with the Griz an experience he will always cherish, but he also enjoyed his return to Missoula as the NAU coach. In 2012, the Lumberjacks rolled into Washington-Grizzly Stadium and won, 41-21, the first time Souers won in that stadium as an opponent.

As he returns to the state of Montana, he hopes to make more memories as the Lights’ next coach. The MSU-N football program hopes to reach half the success that Souers accomplished at NAU as the Lights have gone 3-34 in their past three seasons. If they are going to become competitive, Souers will need to create a strong culture in the locker room.

“We want to build a culture of camaraderie, that our team is connected and that we understand how to communicate,” Souers said. “We have a theme in our program: The right way every day. When you’re doing it the right way every day, that’s going to govern us in most everything we do.”

Not only will he try to get the Lights straightened out on the field, Souers believes he has the responsibility to lead his players off the field as well.

“We are teachers and mentors,” Souers said. “The lessons of life to be learned on the field and off the field are important in the development of young people, particularly between the ages of 18 and 23.”

When he is not in the locker room or on the football field, Souers will be exploring his other passions. He enjoys reading and playing instruments such as the guitar and the piano. While football is his main focus, he knows there is more to life.

“I think life is a wonderful experience and I don’t think I’m as single minded as some of the other types that coach in this profession,” Souers said.

With his return to Montana, he is also returning to where his family started. Both his daughters, Anna and Alaina were both born in Missoula. As he resettles in Montana, he will bring his black labrador Samson who should become a familiar sight for Lights fans. As he starts the next chapter of his life, he knows Havre is the best place to do it,

“I always had an affinity for the people of Montana,” Souers said. “That’s always been in my heart and I’m just really excited about the challenge and the opportunity to do that in a state that I absolutely love.”