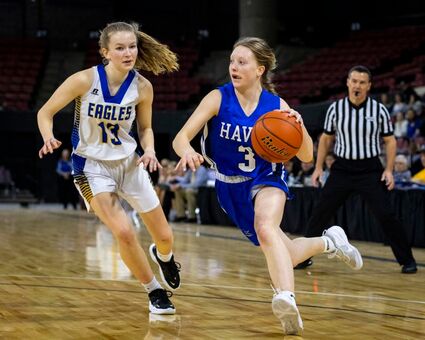 Lizzi Haney dribbles the ball against Lewistown at the Metra in Billings Saturday. The Blue Ponies, won, 63-49, to win their tenth straight game.

No team in the Northeast A has slowed down the Havre High girls basketball team yet this season. The Blue Ponies are undefeated in conference play so far this year and they have won each game by at least 20 points.

The Lewistown Eagles were tasked with slowing down the Ponies Saturday at the Metra in Billings. They did play the Ponies closer than any other conference team this season but the Ponies remained unblemished in the Northeast A as they won 63-49.