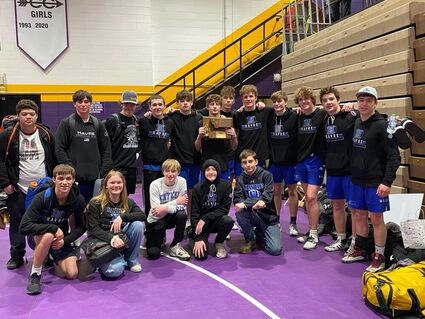 The Havre High wrestling team poses for a photo after finishing third at the Eastern A last Saturday in Laurel. The Pony boys and girls teams head to state this weekend in Billings.

The postseason has finally arrived for the Havre High wrestling team. This past Saturday in Laurel, the Blue Ponies competed in the Eastern A Divisionals in order to qualify for state. While HHS head coach Beau LaSalle believes they could have performed better, the Ponies still finished third in the tournament and 13 of their 15 wrestlers advanced.

"I thought we wrestled alright. We didn't wrestle perfectly but we won some matches that were close," LaSalle said. "We left some points on the table but we're not gearing up for a divisional championship, we're getting ready for next week."