Pony boys ready to send seniors out on a high note

Ponies fall in nailbiter at Fairfield 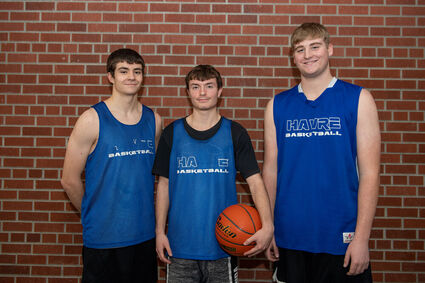 The Havre High seniors from left, Caden Jenkins, Josh Currie and Caleb Spangler, will celebrate their senior night at Havre High Gymnasium this Thursday night. In their final home game of the season, the Blue Ponies will host Browning.

After a road win over Hardin this past weekend, the Havre High boys basketball team was looking to carry that momentum into a road game at Fairfield Tuesday night. The Blue Ponies and Eagles went back and forth all night, but after Fairfield took a 63-62 lead late in the game, the Ponies could not score to win the game.

In such a tight game, the smallest details can mean the difference between victory and defeat. HHS head coach Walynn Burgess the detail that doomed the Ponies Tuesday was their rebounding.

"We gave up too many offensive rebounds in too many key possessions to keep up," Burgess said.

The game started with a bang as Josh Currie nailed a three to give the Ponies a lead on their first possession. But the Eagles scored three straight baskets to take the lead. Some buckets from Caden Jenkins and Shane Patascil helped the Ponies come back to take an 8-7 lead.

Owen Cartwright-Gines scored to retake the lead and an Eagle 3-pointer stretched the lead further. The Ponies played well in the final minutes of the opening quarter. Tre Gary went on a personal 5-0 run to end the quarter, including a 3-pointer at the buzzer to give Havre a 16-14 lead.

Patascil opened the second quarter with another three for the Ponies but the Eagles went on a 7-0 run to take a 21-19 lead. Isaac Pedraza then grabbed momentum with a pair of layups to give Havre the lead again.

Over the next few minutes, the Eagles and Ponies exchanged baskets and the lead. A layup from Caleb Spangler gave the Ponies a 29-26 lead with three minutes in the half. The Ponies then went on a 9-6 run to end the half to take a 38-32 lead into halftime. Burgess believes the Ponies generated offense late in the half because they were working the paint.

"We were just getting inside," Burgess said. "A lot of our shots were coming from inside the paint and anytime we do that, we're a pretty good team."

Looking to stay alive, the Eagles came out ready in the fourth. Daniel Faith and Brian Ward knocked down some shots to cut the deficit to 54-50. After a bucket from Jenkins, Cartwright-Jones and Ward scored a pair of baskets to cut the Havre lead to two points. Cooper Christensen then made a layup and one free throw to give Fairfield a 57-56 lead.

"They just played harder than we did. They got offensive rebounds left and right," Burgess said about the Fairfield comeback. "Anytime you give teams multiple chances on a possession to score, they usually get a score or you get in foul trouble."

The Ponies tried to recapture momentum with a three from Pedraza to take the lead. But a basket from Ward and a pair of free throws from Kaelob Flores gave Fairfield a 63-59 lead. Pedraza knocked down another three to cut the deficit to one.

The Ponies stayed alive in the closing moments of the game as the Eagles could not make their free throws. But the Ponies could not break through to retake the lead, including Pedraza's missed three at the buzzer.

The loss dropped the Ponies to 7-9 on the season. Pedraza led Havre with 14 points while Jenkins scored 11. Ward led the Eagles with 18 points while Cartwright-Gines chipped in 16.

After such a tough loss, the Ponies have little time to sit with it as they turn around to play Browning Thursday night at Havre High Gymnasium. This will be the Ponies' last home game and their senior night where they will honor Spangler, Jenkins and Currie. With the emotions high, Burgess hopes his players can feed off the energy of the crowd.

"Just with it being senior night, there should be a lot of good energy," Burgess said.

The Browning Indians enter the game with a 12-3 record. On offense, they are led by Maurice Redhorn III who averages 11.9 points a game on 43.2 percent shooting. The Ponies will also need to watch out for Tommy Runningrabbit who is averaging 11.5 points on 47.7 percent shooting. Even if the Ponies can limit those players, Browning still has a deep roster.

"Browning is tough as nails. They're a really good team and they're about 10 deep of kids that can play," Burgess said.

The Ponies will need their best players to show up. Jenkins leads the offense averaging 10.1 points a game on 38.1 percent shooting. Xavier Butler also looks to make an impact as he averages 10 points a game and 5.8 rebounds a contest. But if the Ponies are going to rebound from their loss against Fairfield, there is one thing every player will need to do.

"Just having the belief in each other," Burgess said. "When these guys play together, they're sharing it, moving it and the bench has got a good energy."

The Ponies will play Browning Thursday at 7:30 p.m. at HHS Gymnasium.