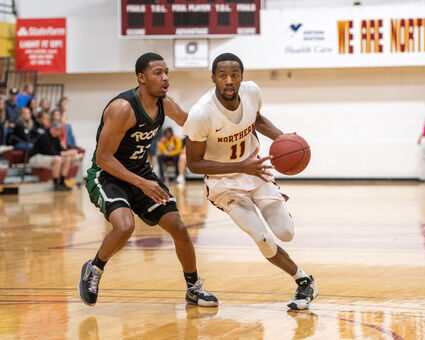 Northern's Mascio McCadney dribbles the ball against Rocky Mountain College Thursday night at Armory Gymnasium. The Lights won, 79-60, against the Bears to solidify their third-place standing in the Frontier Conference.

Locked in a tight battle for third place in the Frontier Conference standings, Montana State University- Northern Lights had to have Thursday night's game in the Armory Gymnasium.

And they got it.

In front of a raucous crowd, Northern won the rubber match with Rocky Mountain College, 79-60, improving to 6-7 in the Frontier, and moving two games clear of the rest of the field for third place. And it was a much-needed win for Northern, which had won just one of its last five, and lost to the Battlin' Bears the last time they were Havre.

"I am just very pleased overall with our performance....