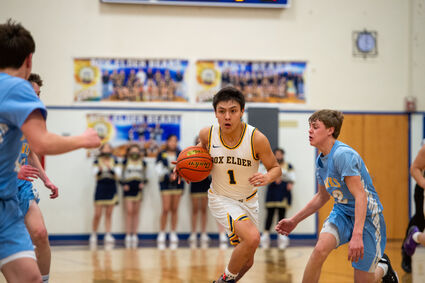 Box Elder's Gabe Saddler drives past the Chester-Joplin-Inverness defense during a District 9C boys game. The Bears and Hawks are two of the top three seeds at this week's 9C boys tournament in Havre. But the field is wide open as teams vie for the championship Wednesday through Friday at the Havre High gymnasium.

It's that time of year again as Hi-Line basketball fans gather at the Havre High gymnasium for the District 9C boys basketball tournament. In the coming days, basketball fans should get to see many exciting games. While teams such as Big Sandy and Chester-Joplin-Inverness are favored by some heading into the weekend, several Hi-Line coaches believe this year's tournament is open for the taking.

"I think the 9C is wide open this year and there is parity we haven't seen in a while," Box Elder head coach Jeremy MacDonald said. "There have been a lot of close games this season and you have to...