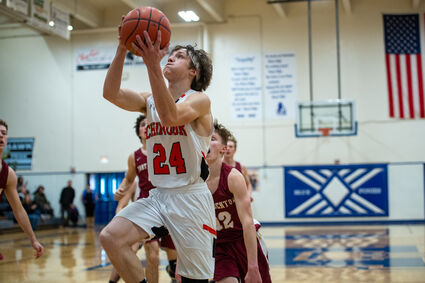 Chinook's Hunter Molyneaux scores a layup on the opening day of the 2022 District 9C boys basketball tournament Wednesday in Havre. The tournament will feature a shot clock this time next year, as the MHSA announced last month the addition of a 35-second shot clock to boys and girls high school basketball.

One thing about the District 9C tournament that never changes is - the passion the communities and the kids have for their showcase basketball event each and every February.

And that passion and intensity won't change as the 9C tourney once again returns to the Havre High gymnasium.

No, the excitment, the energy, the emotions, all of it, from those in the stands, to the bands, the chearleaders, and the players and coaches on the floor, it will be like it always is each and every year - at a fever pitch.

Some things, they just never change.

But, when we're all back in the Blue Pony Corral for the 2023 District 9C tournament, next February, there will be one, very noticeable change. A shot clock will be part of the festivities.

Last month, the Montana High School Association approved the use of a shot clock for boys and girls basketball in Montana, starting with the 2022-23 school year. It will be a 35-second shot clock for both sports, and it, though teams will certainly be used to it come tournament time next year, it's going to change the very nature of tournaments like the 9C.

The reason, you might ask, is that, in the postseason, with championship like the 9C and berths in the Northern C Divisional on the line, a team with a lead in the final minutes could, if they were so inclined, pretty much stall out a game. Now, not every coach at every level of basketball employs that strategy, and we've seen plenty of 9C finales come down to exciting and thrilling conclusions. But with stalling a game out no longer an option starting next season, we're going to see even more thrillers, last-second games and buzzerbeaters at the 9C tournament from here on out, and let's be honest, that's the way high school basketball should be. It should be fun and exciting, for both the players and the fans, and adding as shot clock will only enhance the probability of a game and an outcome being very fun and exciting.

"I think for Class C, we generally play a little quicker pace anyway. I think that's going to change end-of-quarter, end-of-half, end-of-game type scenarios," Chinook boys head coach and former Turner Tornado Chad Jones said Wednesday. "Even on the defensive side, you're going to have to coach a little bit different because you're aware that it's coming up.

"As far as regular play, I don't think it's going to affect the pace of 9C or Class C for that matter or that much."

Not everyone thinks the same about the addition of the shot clock however.

"Personally, I'm not a fan of the shot clock. Even though it looks like we're trying to take the air out of the ball, very few times do we take it over 35 seconds and I'm just personally not a fan of it," CJI head coach Joe Horel said after the Hawks won their first-round game Wednesday afternoon. "It just takes an option away. Whatever shows up, we'll take care of it."

Indeed. Whether one likes the shot clock or not, it's coming, and, an already entertaining 9C tourney is going to be even more so when it takes effect next February.