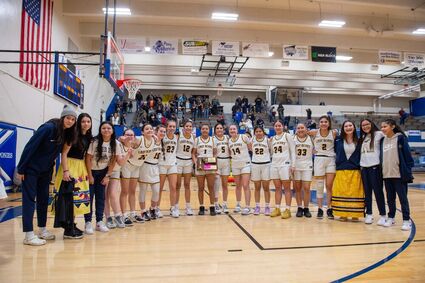 The Box Elder Bears pose with their first-place trophy after coming back to defeat Chinook, 56-51, in the District 9C girls basketball championship game on Saturday night at Havre High Gymnasium.

On Saturday night at Havre High Gymnasium, the Box Elder Bears were looking to build on their strong season with a District 9C girls basketball championship. They struggled early as they fell behind to the Chinook Sugarbeeters but they were able to overcome a ten-point deficit in the second half to win, 56-51, and bring home the 9C trophy.

"It was a tough battle tonight. (Chinook) played great and they challenged us," Box Elder head coach Joel Rosette said. "I'm proud of the girls for battling back to championship form."