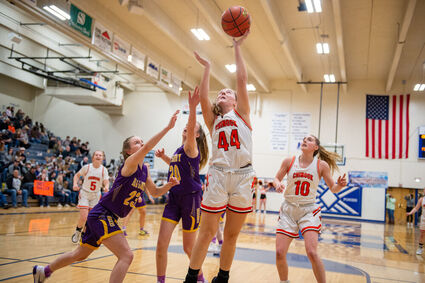 The District 9C girls basketball tournament at Havre High Gymnasium has several teams that can make a deep run. One of those teams is no. 3 seed Chinook, who started the tournament on Wednesday night with a 50-34 win over no. 6 seed Chester-Joplin-Inverness. The Sugarbeeters went into the tournament with a young team, so Chinook head coach Mike Jones thought their performance was a good start to the postseason.

"It was good for them to get some learning experience," Jones said. "Big Sandy's a scrappy team and they're always going to bring it. It was good to get that first win under the belt and get the nerves out of our system."

The game started with the Sugarbeeters and Pioneers exchanging scores. After Hallie Neibauer scored to give Chinook the lead, Eva Wagoner knocked down a couple of free throws to tie it up. Neibauer then made back-to-back baskets to give Chinook a 6-2 lead. Mattie Gasvoda then scored to keep it a one-possession game. A 3-pointer from Lainey Terry then gave Big Sandy a 7-6 lead halfway through the opening quarter.

The Sugarbeeters responded with a 5-0 run. Britton Elliot tied the game with a free throw before back-to-back baskets from Neibauer gave Chinook an 11-7 lead. The Pioneers responded with a 5-2 run to cut the deficit to 13-12 with about two minutes left in the quarter. Momentum again shifted as the Sugarbeeters ended the frame on an 8-2 run. Bree Swanson and Mya Berreth capped off the quarter with back-to-back threes to give Chinook a 21-14 lead to end the quarter.

"(Offense) starts with just getting the playmakers the ball on your team and we're fortunate enough to have a pretty deep bench and a lot of playmakers," Jones said. "We have some youth and we make some mental mistakes but overall, I like our athleticism, I like where our girls are at and it was good seeing them take advantage of those opportunities."

Early in the second quarter, the Pioneers tried to climb back into the game as they cut the deficit to 23-19. But the Sugarbeeters again responded with a 6-2 run to take a 29-21 lead with three and a half minutes left in the half. The Pioneers got some scores down the stretch but Chinook took a 33-25 lead into halftime.

With a 40-32 lead heading to the fourth quarter, Chinook was looking to close it out. The Sugarbeeters kept Big Sandy at bay as they led, 43-35, with five and a half minutes remaining. But the Pioneers began to claw their way back. A three from Eva Yeadon cut the deficit to five points. After a Chinook score, Yeadon made a layup and one free throw to cut the Chinook lead to 45-41 halfway through the final quarter.

"We were passing the ball, looking for open kids and running the offense that we were trying to run," Big Sandy head coach Travis Baumann said about their offense during that stretch. "They just found the right people at the right times."

Chinook was able to recapture momentum and stretch the lead to 50-43 with three minutes remaining. But the Pioneers continued to battle. After Yeadon knocked down some free throws, Kierra Galbavy scored to cut the deficit to 50-47 with about a minute remaining.

But the Sugarbeeters were able to knock down some free throws in the final minute to pull out the victory. Neibauer finished the game with 20 points for Chinook as she went 7-for-13 from the field and 6-for-11 from the charity stripe. Swanson contributed with 14 points as she shot 6-for-14 from the field.

Wagoner led Big Sandy with 20 points as she went 4-for-10 from the field and 11-for-13 from the free-throw line. Yeadon also played well with 14 points on 4-for-13 shooting. With the loss, Big Sandy will head to the consolation bracket to face Chester-Joplin-Inverness. The Hawks will be a tough outing, but Baumann believes they can hang with them

"They've got senior leadership," Baumann said about the Hawks. "Matchup wise, they're a lot bigger than us but I think we can play with them. I think it'll be a fun game."

The Sugarbeeters will advance to the semifinal where they will face Hays-Lodgepole. With a chance to make the district championship game on the line, Jones believes his team has a battle ahead of them.

Chinook will play HLP in the semifinals tonight at 5:30 p.m. at HHS Gymnasium. Big Sandy played CJI in a loser-out game earlier this morning. 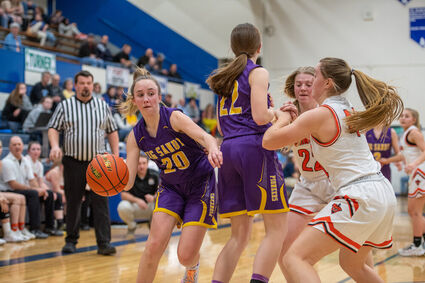