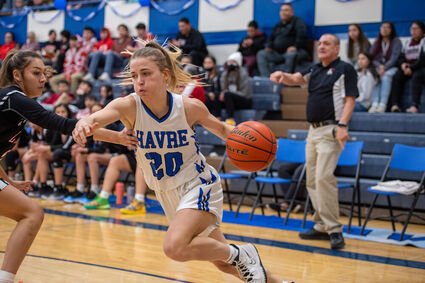 Havre's Avery Carlson, right, dribbles the ball against Browning at Havre High Gymnasium earlier this month. Carlson and the Blue Ponies take their 15-game winning streak into the Eastern A Divisionals in Billings this week.

After winning the state championship last season, the 2021-22 season has seen the Havre High girls basketball roll through the competition. The Blue Ponies finished the regular season with a 17-1 record and are riding a 15-game winning streak.

Now it is time for the Ponies to put up or shut up as they head to the Eastern A Divisionals at the First Interstate Bank Arena in Billings. After everything they have already accomplished and worked on through the season, HHS head coach Dustin Kraske believes it will begin to bear fruit this week.

"Our kids have put a lot of time in and the tourn...