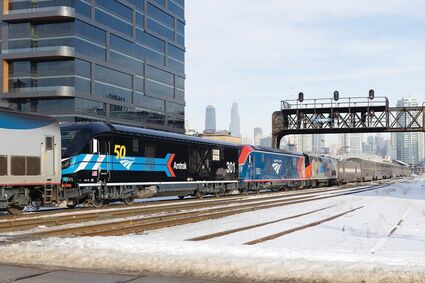 This month, Amtrak put new faster and more energy-efficient locomotives into service, including two on the Empire Builder route through Havre and the Hi-Line.

Locomotives 301 and 302 which will be seen on the area's rails in the coming days are among the first of 75 ALC-42 locomotives to be put into use through 2024.

The locomotives have been touted as being far more environmentally friendly than the 1990s locomotives they are replacing, mostly Amtrak P40 and P42 locomotives, some of which have been in service for more than 25 years.

A release from earlier this month by Amtrak said they greatly reduce pollutants, reducing the emission of nitrogen oxide by 89 percent and particulate matter by 95 percent compared to their predecessors.

They also consume less fuel and reach greater speeds, the release said, up to 125 mph.

The locomotives were developed by a team made up of people from Amtrak and Siemens Mobility, that designed them for heavier and longer trains looking to make multi-thousand mile trips from Seattle to Miami and Los Angeles to Boston.

The release says Amtrak will be ordering more of the locomotives for their network to meet their needs for their long-distance trains.

"We are looking forward to seeing these Chargers safely transport millions of Americans across the nation, whether it be seeking new adventures or connecting to economic opportunity," said Rolling Stock President Michael Cahill of Siemens Mobility North America.

The release also touted the construction of the locomotives, which are made at the rail manufacturing hub in Sacramento, California, a solar-powered facility.

The new locomotives and their maintenance is being supported with about $850 million in funding set aside when the order was placed in 2019, and will power trains used across the U.S.

For now, only the Empire Builder is the only one using the new locomotives, with three locomotives being used on one of its trains.

Federal Railroad Administrator Amit Bose said the bipartisan infrastructure bill recently passed by Congress will allow for Amtrak to make more investments like this to improve their environmental impacts and their service to the people of the U.S.

"These new locomotives serve as another step forward to advance safe, clean, reliable, and efficient passenger rail across the country," Bose said. "With President (Joe) Biden's Bipartisan Infrastructure Law, we're positioned to make even more investments in modernizing rail infrastructure that will make a difference in the lives of Americans."

Amtrak Vice President and Chief Mechanical Officer George Hull said the railroad represents a small portion of the nation's emissions, but they are still looking to play their part.

"We take our commitment to sustainability seriously at Amtrak," Hull said during a ceremony at Chicago Union Station. "... We want to take these steps to be the cleanest passenger railroad operating diesel trains in North America, commuter or interstate. We're dedicated to continuously seeking new and innovative technologies that provide solutions to meet transportation needs while reducing health and climate impacts."

The new locomotives have also drawn praise from both sides of the political spectrum, in both Montana and Washington.

Montana Sen. Jon Tester, a longtime supporter of Amtrak, said these new locomotives will be a massive benefit to the Hi-Line and the U.S. this morning.

"The Empire Builder Route is critical to the economy of Hi-Line communities and keeping folks on the Northern Tier of our state connected, so these new locomotives are great news for northern Montana," Tester said in a statement to the Havre Daily News. "Increased Amtrak efficiency will lower costs for consumers, reduce pollution in the Treasure State, and boost our already booming tourism economy."

Fellow Montana Sen. Steve Daines also voiced his support for these new locomotives, saying that they would improve the state's tourism industry, as well as the economy in general.

"The Empire Builder helps connect Montanans and brings visitors from across the country our great state," Daines said in the Amtrak release. "Amtrak's new locomotives will support Montana jobs, our tourism economy and folks along the Hi-Line who rely on Amtrak to access critical services."