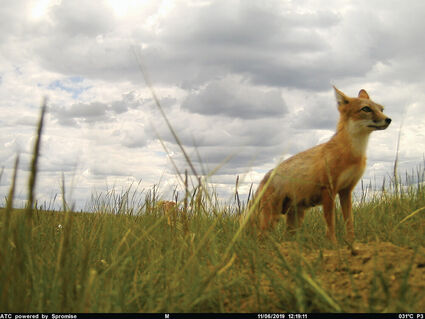 The offspring of a swift fox introduced to repopulate the animal stands near a camera trap in this image taken by the trap set to document the animals.

The reintroduction of swift foxes to this part of north-central Montana appears to be a success in it's early stages.

Fort Belknap Indian Reservation, working in a cooperative effort with multiple state, educational and conservation entities, is reintroducing the swift fox to grassland areas of the reservation.

The diminutive, gray and gold fox is native to the area but its numbers sharply declined in the early 1900s and it was declared extinct in Montana in 1967. In addition to building on other efforts to bring back populations in Montana and southern Canada, this reintroduction will he...