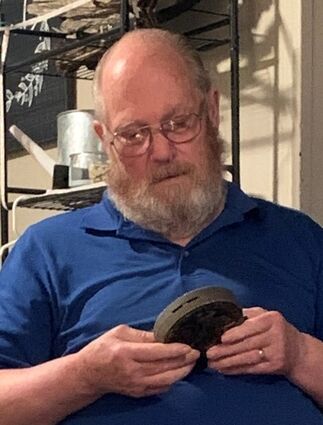 Tom was born August 25, 1947, to Warren “Bud” and Olga (Laursen) Robinson in Havre, MT. Tom grew up living and working in their family’s mom-and-pop grocery store (their store was the current Highland Park Laundromat).

In 1968, Tom joined and served in the U.S. Navy. He spent most of his two years on the U.S.S. Corry. After his service, he returned to Havre, and October 13, 1972, married Margaret Smith. Together they had one child, Tracie.

Tom worked for 32.5 years as a Baker at Buttrey’s/Albertsons, and for some years worked a second job at Northern Tire.

He was an eloquent storyteller, and loved to share stories of his time in the boat (ship) on “the pond” (ocean). He also shared stories from the bakery. He came home each day to share how many gallons of water, milk, pounds of flour and sugar it took to fill the bakery cases with cookies and pastries. A skilled and talented cake decorator and baker, he loved knowing that people enjoyed the goodies he baked.

He enjoyed going to coffee with his friends, playing cards, especially pinochle and cribbage, spending time as a member of the Havre Beneath the Streets Model Train Club, and watching old “black and white” Westerns. He also genuinely appreciated the Montana cold. His unique sense of humor showed up at such times, as, during his work years, he welcomed out-of-town new hires by informing them that during the winter they could go into the store’s walk-in freezer to warm up. “Zero degrees feels a whole lot warmer than 50 below.”

Tom is preceded in death by his parents, Warren and Olga Robinson; his cousin and friend Robert “Bob” Laursen; brother-in-law and friend Ernie Smith; several friends, relatives and relatives-in-law; and his dog Reggie.

In lieu of flowers, please make donations in honor of Tom Robinson’s name to the Havre Beneath the Streets Model Train Club, an Arbor Foundation, or a charity of the donor’s choice.