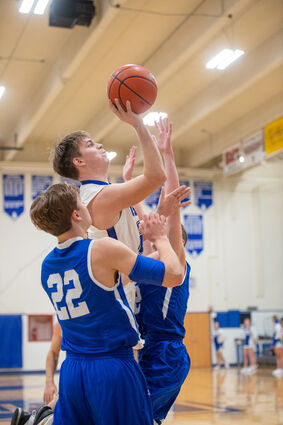 Havre's Crawford Terry takes a shot against Malta at Havre High Gymnasium last month. The Blue Ponies began the Eastern A Divisionals on Wednesday in Billings. While the Ponies played hard, the Ponies lost, 49-46, to Laurel to start the tournament.

The Havre High boys basketball team finally began the postseason Wednesday night at the First Interstate Arena in Billings. The Blue Ponies got the Eastern A Divisionals started at the Metra with a game against the Laurel Locomotives.

It was a competitive game throughout and one that the Ponies had several opportunities to win. However, the Locomotives fought back and defeated Havre, 49-46, in overtime.

"It just came down to a couple little things, a couple extra turnovers in the end and went cold towards the end. Just a tough one to swallow," HHS head coach Walynn Burgess said. "I jus...