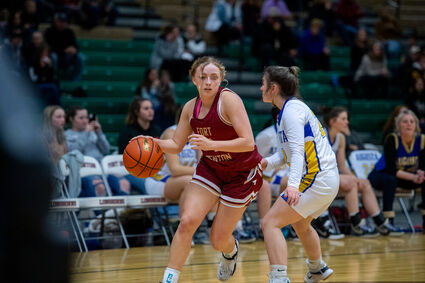 Fort Benton's Ashlee Wang dribbles the ball against Augusta Wednesday night at the Four Seasons Arena in Great Falls. The Longhorns began the Northern C Divisionals with a 53-40 win over Augusta.

After a magical year last season that saw them win the Northern C as well as the Class C state title, the Fort Benton girls basketball faced much more adversity throughout this season. The Longhorns dealt with several injuries through the regular season and finished in the middle of the 9C standings.

But they persevered to take third in the 9C tournament last weekend to qualify for this year's Northern C Divisionals at the Four Seasons Arena in Great Falls. As they try to repeat as divisional champions, the Longhorns started things on the right foot with a 53-40 win over Augusta Wednesday...