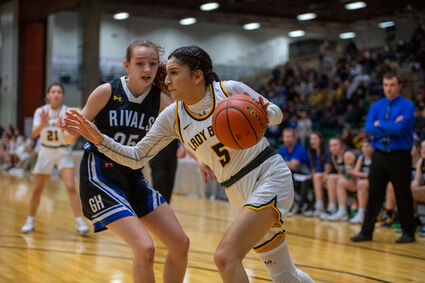 Box Elder's Mariah Arkinson dribbles the ball against Geraldine-Highwood Thursday night at the Four Seasons Arena in Great Falls. She scored 12 points as the Bears defeated the Rivals, 56-23, to begin the Northern C Divisionals.

As the Northern C Divisional girls basketball tournament continued Thursday at the Four Seasons Arena in Great Falls, the Box Elder Bears and the Chinook Sugarbeeters finally got in on the action. The District 9C champion Box Elder Bears started the tournament well as they won, 56-23, against Geraldine-Highwood. But on the other hand, 9C runner-up Chinook lost, 55-23, to Roy-Winifred.