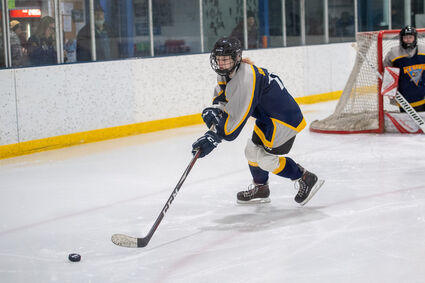 Havre's Marki Benjamin skates against the Salmon Rapids at the Havre Ice Dome on Friday. The Havre Ice Hawks defeated the Missoula Bruins, 4-3, on Sunday to finish third in the MAHA 14U/19U Girls State Tournament.

As spring approaches, the winter sports season comes to a close. One of those sports is girls hockey which ended its year with the 2022 Montana Amateur Hockey Association 14U/19U Girls State Tournament at the Havre Ice Dome this past weekend. The Havre Ice Hawks 19U girls team competed in the tournament and finished the weekend with a third-place trophy.

The Ice Hawks began pool play Friday afternoon with a 2-1 victory over the Salmon Rapids. The Ice Hawks came out slow as the Rapids took a 1-0 lead in the first period thanks to a goal from Amara Macfarlane. But early in the second period...