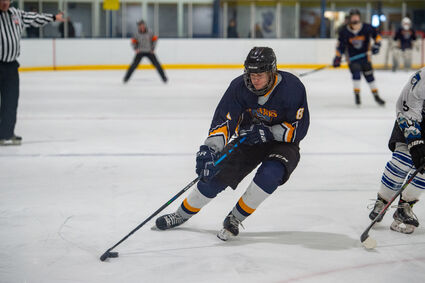 Havre's Michael Emge skates with the puck against the Helena Big Horns at the Havre Ice Dome last December. The Havre Ice Hawks finish the year this weekend when they compete in the state tournament in Billings.

It has been nearly a month since the Havre Ice Hawks high school hockey team has hit the ice. This weekend, they will finally return to the rink, but this time it will be for all the marbles as they compete in the state tournament at the Centennial Ice Area in Billings. While the Ice Hawks finished below .500 in the regular season, head coach Chase Hanson expects them to play hard to end the year.

"(We expect to) just show up and compete. That's what I've been preaching these last couple of weeks since our end of season games," Hanson said. "We are a very young team. We ended the season j...