By Kason Clark and George Ferguson 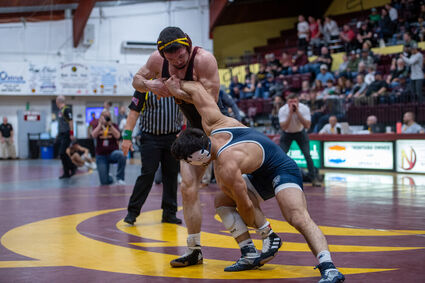 Montana State University-Northern's Chase Short, left, along with five of his teammates are headed to Kansas this weekend for the NAIA national championships. The six Lights are certainly a team to watch this weekend. For complete coverage, follow the Havre Daily News on Twitter, Facebook and online all weekend long, and see Monday's HDN sports section for all of the action from the national tournament.

A long college wrestling season finally comes to an end this weekend as the Montana State University-Northern Lights head to Wichita, Kansas, for the NAIA national championships. The Lights will be represented by six wrestlers this weekend and MSU-N head coach Tyson Thivierge believes all of them are capable of bringing home hardware,

"I believe these six guys are going to do a lot of damage. I believe all six of them can win the national title," Thivierge said.

More than 250 wrestlers from across the nation will compete at this weekend's tournament, with 43 coming from the Cascade Collegiate Conference. Along with MSU-N, wrestlers from Arizona Christian University, Corban, Eastern Oregon, Embry-Riddle University, Menlo, University of Providence, Southern Oregon and Vanguard University. Menlo leads all teams in the conference with eight wrestlers competing in Wichita.

As the season comes to an end, so too will the careers of seniors such as Nick Kunz, an All-American and former national champion, Isaac Bartel, the defending national champ at 197, and Chase Short, another former All-American. Carl Hansen, NaKoda Siegel and Martin Wilkie will also wrestle for the Lights this weekend. As they head into their final tournament of the year, Thivierge is excited to see if they can add to their legacies in the program.

"I love seeing them achieve their goals. That's what I'm most excited about," Thivierge said. "It's bittersweet because you got three seniors who've been with me for five years so it's unfortunate that those three won't be back next year. But they're good leaders. They're setting these younger guys up really well for future success."

The NAIA national championships, which will also feature former Havre Blue Pony Mick Chagnon, will begin Friday morning and run through Saturday night in Wichita. The finals will be streamed live on ESPN+.

A former national champion at 125 pounds, and a two-time All-American, Kunz has had a strong run at 133 this season. He battled to a third-place finish at the CCC and earned the No. 9 seed, which means he is in top seed Connor Gimson's (Indiana Tech), quarterfinal. St. Ambrose Matt Robertson, Tech's Matt Gimson and Grand View's Carson Taylor are also tough opponents in a loaded 133 field. Kunz takes on Graceland's Joseph Lupton in the first round. While there are some tough opponents in his bracket, Thivierge believes Kunz is set up for success.

"I think Nick's sitting really well. He's in the top side of the bracket. If we get there, we'll have the defending national champion in the quarterfinals," Thivierge said. "It doesn't matter where they're seeded, you got to beat everybody to win it."

Wilkie should be seeded higher than No. 11 after winning the CCC and having huge first season at Northern. Still, the former Havre Blue Pony great has to be considered someone who will make noise this weekend, the way he is wrestling right now. Reinhardt's Trent Leon could be a tough second-round matchup, while Lourdes Nick Heinemann and Grand View's Shea Ruffidge is in his half of the draw, while Doane's Baterdan Boldmaa is the No. 1 seed. Wilkie begins his first national tournament against Logan Wagner of Marian.

"Probably one of the deepest weight classes in the NAIA talent wise," Thivierge said about the bracket. "He's on the bottom half of the bracket. Things look really good for him to make a good run. Just got to go out there and be Martin Wilkie."

Short is a former All-American, who will be a dark horse this weekend. He's also in a relatively small bracket, which means, anything can happen. Cole Smith of Cumberlands is the top seed and undefeated, while Sid Ohi of Life and Corban's David Rubio are tough as well. Short meanwhile, has to face third-seeded Marty Margolis of Grand View in the opening round. While he believes Short should have had a better seed, Thivierge believes Short can take care of business this weekend.

"Seeds don't matter. You got to beat everybody to win it," Thivierge said. "I really like where Short's at in his bracket and I think he's going to raise some eyebrows."

It's been a breakout season for Siegel, who is seeded 10th in the 174-pound draw. He's in the quarter of second-seeded Casey Randles of Grand View, while Lindsey Wilson's Joe Koontz is the No. 1 seed. Still, while Siegel is in a tough draw, he's been tough all season long, and there's no doubt he's going to be somewhere on the podium by the end of the weekend.

"He's just a little juggernaut. He's got a gas tank and when his motor's going, he's unstoppable," Thivierge said. "He's had a lot of close matches this semester, most of them gone in our favor. He's the one that gives me the most gray hairs because he doesn't mind being in an overtime match but he can take care of business."

Hansen returns to nationals via a wildcard entry. But the powerhouse just needed to get into the field and he'll do the rest. Grand View's Ben Lee is a heavy favorite in the draw, but Hansen is on the opposite side of the bracket, so, while the 184-pound class is always one of the best in the tournament, Hansen will be a tough out. He opens the tourney against No. 7 seed Jesse Da Perez of Ottawa in the first round.

"Carl's dangerous. He could score in any position. When Carl shows up, Carl is probably one of the most lethal kids at that weight class," Thivierge said. "He's in a good position to make a really good run. He is on the side of the defending national champ but that match excites me. I think Carl is a bad matchup for him."

There's not much left to say about the defending national champion. He hasn't lost to an NAIA opponent in over two years, he's about to become Northern's all-time leader in wins, and, above all else, he's the best wrestler in all of NAIA. Lindsey Wilson rival Trevor Lawson will be gunning for a rematch with Bartel in the finals, while Life's Zane Lanham is undefeated this season. But it will take a herculean effort to beat Bartel this weekend. He has a bye in the first round. While Bartel is favored, Thivierge knows he will need to work for it this weekend.

"Everybody thinks that Isaac's a shoo-in to win but there's five guys in that bracket that are tough so anything can happen," Thivierge said. "Tough group of kids in his weight so we're excited to get there and watch him wrestle and go to work."