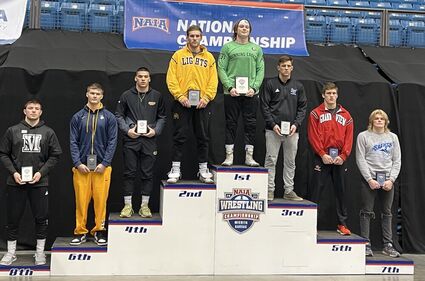 Wrestling at 197 pounds, Northern's Isaac Bartel finished second at the NAIA National Tournament this past weekend in Wichita, Kansas. While he fell short in the championship match, Bartel finishes his career as a five-time All-American for the Lights. As a team, the MSU-N wrestling team finished sixth in the tournament.

The season finally came to an end for the Montana State University-Northern wrestling team as the Lights competed in the NAIA National Championship Tournament in Wichita, Kansas this past weekend. In the tournament, the Lights got off to a shaky start but were able to bounce back to finish sixth in the tournament.

"They rebounded extremely well and we went on a run," MSU-N head coach Tyson Thivierge said Saturday night. "They exceeded my expectations, they battled hard and I'm proud of them."

The Lights scored 66 points as a team to take sixth in the tournament. Grand View scored 206.5 p...