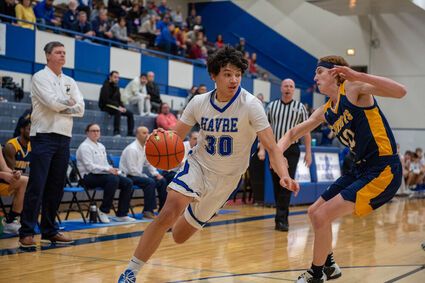 Havre High junior Isaac Pedraza drives the ball during an Eastern A game against Miles City back in January in Havre. The Blue Ponies finished fourth at divisionals and are headed to their first state tournament since 2016. The Ponies play Frenchtown in the first game of the Class A state tournament Wednesday afternoon in Missoula.

It has been a long time coming but the Havre High boys basketball team will finally make its return to the Class A State Tournament this week in Missoula. It is the first time the Blue Ponies have made the state tournament since 2016.

And at the end of a season with many ups and downs, HHS head coach Walynn Burgess believes the Ponies have found their stride.

"We got hot at the right time and did the right things and got better towards the end," Burgess said. "We want to go down there and make some noise. We want to show people that we know how to play basketball up here on the Hi-Line."

With it being six years since their last visit, it will be the first time playing in the state tournament for everyone on the roster. As a senior, Josh Currie is excited to finally get the chance to play on the biggest stage of his career.

"I'm extremely proud to be a part of this team," Currie said. "We didn't have as much talent as we did the last couple of seasons but I'm just really proud of my teammates and our coaching staff for putting all the pieces together at the right time."

After winning a pair of dramatic contests at the Eastern A two weeks ago, the Ponies start the Class A state tournament Wednesday at noon with a game against Frenchtown. The Broncs enter the tournament with a 14-9 record and they qualified for the tournament after finishing fifth in the Western A Divisional. While they are a lower seed, the Ponies should not take them lightly.

Connor Michard is a force for the Broncs down low as he leads the team averaging 13.1 points and 8.4 rebounds a game this season. Devin Shelton should also be on the Ponies' rader as he averages 11.3 points a contest on 54 percent shooting from the field. Eli Quinn is also playing well with 9.2 points a game on 40.8 percent shooting. Whoever gets the ball Wednesday afternoon, the Ponies know they are in for a handful.

"They've got a lot of good talent," Burgess said. "They're really long. They don't shoot really well but they can still score and they love to get up and down so it's going to be a really interesting matchup for us."

The Ponies qualified for state after finishing fourth in the Eastern A Divisional. While they have a 9-13 record, they won two tough games in divisionals to qualify for state. In his senior season, Caden Jenkins has led the Ponies averaging 10.4 points a game on 38.2 percent shooting. Xavier Butler has also stepped up lately and is averaging 10.2 points a game on 55 percent shooting, while Isaac Pedraza has also been a key contributor inside and out, and players like Currie and Caleb Spangler have added veteran leadership for an otherwise younger Pony squad.

If the Ponies defeat Frenchtown Wednesday, they would next play Thursday at 1:30 p.m. against Butte Central. The Maroons should be one of the favorites in the tournament as they just won the Western A Divisional and have a record of 22-1.

Dougie Peoples has been a force on offense this season for Maroons as he has averaged 22.3 points a game on 51.3 percent shooting from the field. Kyle Holter is also having a strong year with 11.2 points a contest on 55.4 percent shooting. Eric Loos has been a key contributor for the Maroons with 9.2 points and 7.3 rebounds a game.

After the Ponies finish up their first game of the tournament, Dillon and Laurel will play each other at 3 p.m. The Dillon Beavers should be another favorite in the tournament with a 16-4 record and a second-place finish in the Western A Divisional. Connor Curnow has led the Beavers this season with 16.8 points and 6.8 rebounds a game this season. Jonathan Kirkley has also been playing well with 12.5 points a game on 50.3 percent shooting.

The Laurel Locomotives are 15-8 this season and they finished third in the Eastern A Divisional to qualify for the state tournament. Konnor Gregerson has led Laurel with 11.9 points a game on 44.7 percent shooting. Kyson Moran will look to continue his strong season as he is averaging 10.5 points and 6.2 rebounds a contest.

The Locomotives are a familiar opponent for the Ponies as they faced off three times this season. The Ponies got the better of Laurel in the season opener all the way back in December. But the Locomotives defeated Havre twice in the Eastern A Divisionals.

The tournament will continue at 5 p.m. with a game between Lewistown and Hamilton. The Eagles are another favorite to win the state title with a 20-1 record and an Eastern A Divisional championship. As a Northeast A rival, the Eagles and Ponies met up twice this year with the Eagles winning both of those contests.

The Eagles have been led by Fischer Brown who averages 21.2 points a contest on 58.6 percent shooting from the field. Royce Robinson has been a key player for the Eagles with 15.4 points and 7.8 rebounds a game this year.

The tournament will continue Thursday at noon with a game between Glendive and Polson. The Glendive Red Devils have a chance to make a run this week as they enter the tournament with a 16-5 record and a second-place finish in the Eastern A Divisional. In their two conference games in the regular season, Glendive swept the Ponies.

Riley Basta has been reliable for the Devils this season with 16.6 points a contest on 44.9 percent shooting. The Devils have also gotten contributions from Michael Murphy and Taven Coon who both average double-digit points a game.

The Polson Pirates finished third in the Western A Divisional and they have a 13-6 record this year. Colton Graham has led the Pirates averaging 19 points and 7.3 boards a contest this season. Jarrett Wilson has played steady with 13.5 points a game on 44.5 percent shooting.

Even though Lewistown, Butte Central and Dillon should be the favorites and Glendive is a sleeper pick, Burgess believes anyone can make a run this weekend if they can get on a roll.

"Any of those nine teams that showed up is going to be real tough right now," Burgess said. "It's one of those times when it will be whoever gets hot, so it'll be interesting to see how it all turns out. I'm really excited to get down and see them all in person."

The Ponies have found their momentum at the right time to earn a spot in the state tournament. If they are going to keep it up, the Ponies will need to continue coming together as a team and relying on their defense.

"It's going to take all of us. It's never just one or two guys that are going to win on this team," Burgess said. "If we can get it taken care of on the defensive end, our offense will always take care of itself through our defense so hopefully the boys start to understand that." 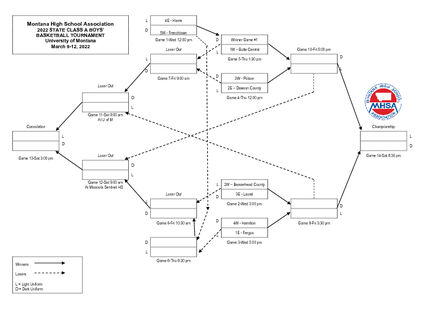 The Ponies will begin the Class A State Tournament at the University of Montana in Missoula when they play Frenchtown on Wednesday at Noon. The tournament, which will be held in famed Dahlberg Arena, will run through Saturday night's championship game, which tips off at 6:30 p.m.