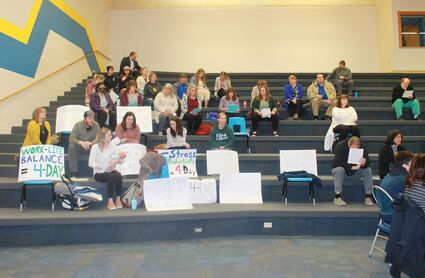 Signs supporting a four-day school week are displayed Tuesday in the Havre Middle School Assembly Room near audience members at Tuesday's Havre Public Schools Board of Trustees meeting. The board Tuesday accepted four possible calendars, two with four-day weeks and two with five-day weeks, and will select at a special meeting Tuesday, March 22, which of the four to use during the 2022-23 school year.

Editor’s note: This version corrects the job title of Sunnyside Intermediate School Librarian Carrie Gillen.The Havre Public Schools Board of Trustees examined the possibility of moving to a four-day week for the district at their monthly meeting Tuesday, a decision spoken in favor of by a crowd of teachers which will be voted on at a later meeting.

Discussion of the issue began with Havre Superintendent Craig Mueller presenting four possible calendars to the board, two with four-day models and two with more-traditional five-day models.

Option one was referred to as a "true four-day wee...