Getting to know the Blue Ponies' X-Man 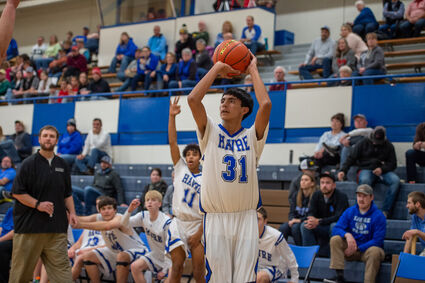 Xavier Butler has emerged as a top player for the Blue Pony boys basketball team as they play in this week's Class A state tournament in Missoula. Butler credits putting in work in the offseason and just enjoying the game for why he has been so successful this season.

The Havre High boys basketball team has had several ups and downs this year but were able to rally in the Eastern A Divisionals to place fourth and qualify for this week's Class A State Tournament in Missoula. Xavier Butler stepped up to help the Ponies keep their season alive, but he knows it was a team effort to make it to state.

"We were just sticking together and doing the little things," Butler said.

The state berth was the Blue Ponies' first since 2016, so it will be a new experience for everybody on the roster. As a member of the team to end the six-year drought, Butler is proud of what the Ponies have accomplished this year.

"It feels great for such a young team to make it to state after losing five starters from last year," Butler said. "I'm really proud of everyone coming together and making it to state."

Butler has stepped up lately to help the Ponies' success. This season, he is averaging 10.2 points a game on 55 percent shooting from the field. He also leads the team averaging 5.8 rebounds a contest. In a loser-out game against Hardin, Butler led the Ponies with 18 points to help lead them to a 58-57 victory to keep their season alive. Butler credits his recent success to all the hard work he puts in at practice.

Butler and the Ponies hope to keep things rolling this week as they head into the state tournament. Before he hits the court for the last time this season, the Havre Daily News got the chance to ask hime five questions.

HDN: What do you look forward to about the state tournament?

Butler: "Just that atmosphere. I've never experienced anything like that. I think it'll be cool for everyone just to make it. Just the experience of being in state and getting on the floor and just being in there."

HDN: How did you originally get into basketball?

Butler: "Probably my dad because he was a basketball player and we used to go to a lot of open gyms."

HDN: Do you have a favorite basketball memory?

Butler: "When I was a freshman, I played a bunch on C-squad. (One time, our coach) said if you guys win these next three games, I'll take you out to dinner. We then lost all three games."

Butler: "My favorite basketball player has to be Derrick Rose when I was younger growing up. I just loved watching him and the Chicago Bulls are my favorite team."

HDN: Outside of basketball, do you have any other hobbies or passions?