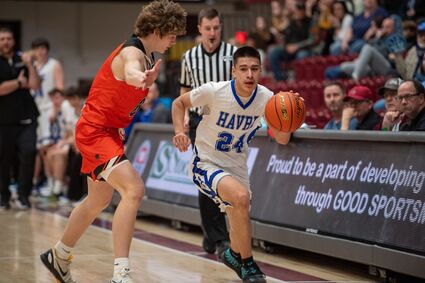 Shane Patcsil drives up the floor during Havre's win over Frenchtown at the Class A state tournament Wednesday in Missoula.

MISSOULA - Six years ended up being worth the wait.

The last time a Havre High boys basketball team reached the Class A state tournament, it was held in Missoula's Dahlberg Arena back in 2016. Fast forward to the 2022 state tournament, and there were the Blue Ponies, battling the Frenchtown Broncs in the first round of the 2022 A extravaganza Wednesday afternoon.

And while it was certainly a battle from start-to-finish, Havre's state tourney drought was snapped with a resounding 65-54 win over the Western A Broncs.

"It just makes you proud of the kids because of the work they've been putting in, the work that people don't get to see, the long travels in the summer, the waking up at 6 (a.m.) to do that type of stuff," Havre High head coach Walynn Burgess said. "It's just one of those things that helps keep building that in the right direction. To get the win against a really good Frenchtown team like that, they're well coached, real long, good athletes, it's a good win for us."

The win showed Havre's strengths too, including a 23-point performance from junior Isaac Pedraza. The second-year starter hit on 7-of-10 field goals, including three 3-pointers and six free throws, helping the Ponies pull away down the stretch.

"People didn't think we'd be here (this year)," Pedraza said. "We just came out, played hard, we knew we had to prove people wrong."

They certainly proved they were worthy of the berth they earned at the Eastern A two weeks ago.

In what was Havre's third straight postseason win, the Ponies got two early buckets from Jevy Jenkins, and a late Pedraza shot to close out the first stanza leading 15-10. Pedraza then dropped a triple to open the second frame, capping a 9-0 Havre run. The Broncs didn't go away however, and despite a big three from Shane Patacsil, the Ponies and Broncs went into halftime tied at 23-23.

It didn't stay tied for long however. Caden Jenkins and Pedraza qwent back-to-back from downtown to give the Ponies the lead back, but, a 10-0 run by the Broncs ended the third quarter with Frenchtown leading 37-35.

Havre though, had been in situations like Wednesday's third quarter many times before.

"I thought we did a great job of keeping our composure," Burgess said. "The kids stuck with the game plan. They trusted each other. There was no panic at all from our guys."

Instead, Havre took the lead back on another Pedraza three, sandwiched in between back-to-back layups by Xavier Butler. And though Frenchtown would keep things close for a while, Pedraza and Josh Currie hit on layups to steal the momentum back, and then, Pedraza, Patacsil and Caleb Spangler ended up sealing the deal at the foul line, which was another key according to Burgess.

"We work on that every day," Burgess said. "Going 16-for-21 was huge. We got the rebounds we needed and then made our free throws, that was big."

Pedraza certainly came up big, going 6-for-8 from the charity stripe, while adding a team-high five rebounds as well. Patacsil and Caden Jenkins each chipped in with nine points. Ponies forced 11 turnovers and won a big edge on the boards 32-23. And while those stats were telling, Pedraza felt Havre's ability to stay composed down the stretch made all the different, and helped them get to today's first-round game against Western A champion Butte Central.

"Keeping our composure," Pedraza said. "Especially as a young team, I thought we did a good job of that. This team works hard. So we just want to keep enjoying this moment."

The Ponies will definitely get that chance as they take on the Maroon (23-1), who won the Western A and are led by star junior guard Dougie Peoples, Class A's leading scorer. Butte Central's defense is just as good, as they allow just 39 points per night.

And while the Maroons will be a hefty challenge for the young Ponies, who also set up a big day for Havre High as the boys game will be just before the Havre girls begin their march for another state title. Burgess was just proud of how far his team has come this season, and wasn't looking beyond Wednesday's exciting win yet.

"Just really proud of this team, and we so appreciate all the support from Blue Pony Nation," Burgess said. "We're excited to be here, representing the Blue Ponies."