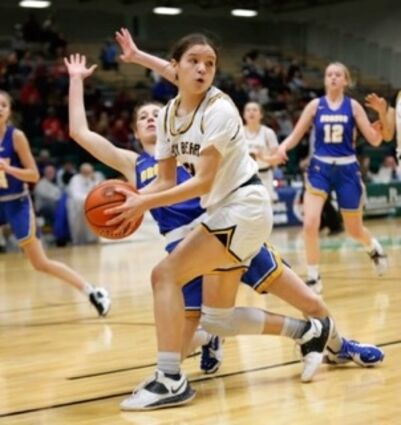 Box Elder's Meiyah Sutherland makes a play with the ball against Melstone Thursday at the Four Seasons Arena in Great Falls. After a slow start, the Box Elder Bears went on to defeat Melstone 42-33. The Bears now advance to the semifinals tonight where they will face Saco-Whitewater-Hinsdale for a spot in Saturday's state title game.

Early Thursday afternoon, it looked like the Class C State Tournament would begin on a sour note for the Box Elder girls basketball team. The Bears failed to score a single point in the first quarter and wound up trailing Melstone, 11-0, early in the second quarter. But the Bears were able to claw their way back to defeat Melstone, 42-33, to start the tournament at the Four Seasons Arena in Great Falls.

"The kids stayed calm and they believed in each other and in the system," Box Elder head coach Joel Rosette said. "I just give them a lot of respect for the way they handled that first qua...