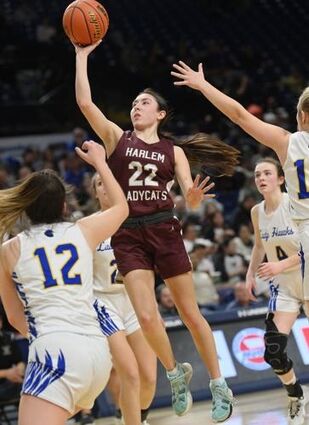 Harlem's Taya Trottier goes for a score against Thompson Falls on Thursday night at the Class B State Tournament in Bozeman. Trottier scored 22 points to help Harlem win, 61-39, to advance to tonight's semifinals against Colstrip.

In the Class B State Tournament game on Thursday night between the Harlem boys basketball team and Eureka, neither team deserved to lose. Both teams played hard to the point an extra period was needed to decide a winner. Even in overtime, it was heads or tails to predict who would win the game.

The Eureka Lions eventually took the advantage with a three-point lead with less than 15 seconds remaining. But Harlem's Teegan LeValdo came through with a 3-pointer to tie the game up. Seconds later, Eureka turned the ball over and LeValdo put the ball in the net with a floater. The Lions were then unable to get a shot off and Harlem pulled off the stunner to win, 63-61, over Eureka in Bozeman.

"That was the craziest ending we've had all year," Harlem head coach Geno LeValdo said. "It was a good win. We had to grind it out. Hats off to Eureka."

The Lions scored on their first possession with a 3-pointer from Gavin Bates. The Wildcats responded with a 7-0 run to take the lead. Caleb Cole and Tyler Cichosz scored some baskets before RJ Ramone knocked down a three for Harlem. The Lions then responded with a run of their own to take an 8-7 lead late in the opening frame. Momentum again swung back to Harlem's favor as they controlled the rest of the first quarter. At the end of the opening frame, the Wildcats had a 20-12 lead over the Lions.

The Wildcats remained in control as they stretched their lead to 26-15 early in the second quarter. But the Lions finally found their groove again thanks to the efforts of Bates, who went on to score ten points in the second quarter. As a team, the Lions ended the half on an 11-0 run. Thanks to a last second score from Tristan Butts, the game was tied, 26-26, at halftime.

Looking to recapture momentum, Harlem started the second half with a three from Cole to retake the lead. Ramone then made a layup and one to further stretch the lead. The Wildcats continued to play well over the next few minutes as they stretched their lead to 43-33 late in the third.

"We were pushing the ball and running in transition," LeValdo said about the third quarter run.

But a three from Joey Kindal cut the lead to 43-36 to end the quarter. The Lions were able to convert that three into momentum as they went on an 11-0 run to retake the lead in the fourth. From that point forward, the Wildcats and Lions exchanged scores late into regulation. With about a minute left, Carson Komac made both his free throws to give Eureka a 53-51 lead. Cole then made a layup to tie the game once more. Neither team was able to break through again as they went into overtime.

The Wildcats and Lions continued to battle in overtime. Cichosz scored a pair of baskets to give Harlem an early 4-0 lead. But scores from Dan Dunn and Bates knotted things up again. After a Harlem free throw, Bates knocked down four straight free throws to give Eureka a 61-58 lead with seconds remaining. That's when Teegan LeValdo came through for Harlemt to lead them to the last-second victory.

Despite fouling out before overtime, Ramone led Harlem with 17 points. Cole scored 13 for Harlem while Cichosz contributed 12 points. In the loss, Bates had an excellent game with 29 points.

The Harlem Wildcats now advance to the semifinals tonight to face Lodge Grass. While he is happy to win their opening game of the tournament, Geno LeValdo believes the Wildcats will need to play better if they want to compete against Lodge Grass tonight.

"We expect this to be a high, intense game," LeValdo said. "We haven't really found our groove yet but being off for a couple weeks, we figured that we'd come out that way. Hopefully we'll pick it up tonight against Lodge Grass."

The Harlem boys basketball team will play Lodge Grass in the semifinals tonight at 8 p.m. at Brick Breeden Fieldhouse in Bozeman.

Despite a losing record in the regular season, the Harlem girls basketball team has flipped the switch in the postseason. The Wildcats played well in the Northern B Divisionals to finish second and qualify for a spot in the Class B State Tournament in Bozeman. Well, their Cinderella run is not over yet as the Harlem Wildcats defeated Thompson Falls, 61-39, on Thursday night to begin the state tournament.

"The girls looked good," Harlem head coach Brandon Trottier said. "We were nervous early ... but we just dominated the rest of the way."

The first quarter saw the Wildcats and Blue Hawks exchange buckets. It would have been tied to end the opening frame, but Natalie Roberts knocked down a floater at the buzzer to give Thompson Falls a 10-8 lead.

The Blue Hawks started the second quarter strong to take a 14-12 lead. But the Wildcats took control with a personal 7-0 run from Taya Trottier to take a 21-14 lead. Emma Billmayer then knocked a 3-pointer to give Harlem a 10-point lead. A Thompson Falls free throw cut the Harlem lead to 24-15 at halftime.

After the Blue Hawks scored to start the second half, the Wildcats maintained control with a 9-0 run. Billmayer continued to play well with a three and a layup to help the Wildcats stretch their lead to 33-17.

The Blue Hawks were unable to claw their way back as Harlem took a 42-28 lead into the fourth quarter. Trottier started the fourth quarter with a floater to keep things rolling. Even after she went to the bench, the Wildcats continued to pull away for the win.

The Wildcats will next play Colstrip in the semifinals tonight. The Colstrip Fillies are one of the better tournaments in the tournament, but Brandon Trottier believes his team won't back down.

"It's going to be pretty fast-paced. (Colstrip) likes to rebound and push the ball," Trottier said. "I know my girls are confident enough to get the W."

The Harlem girls basketball team will play Colstrip in the semifinals tonight at 5 p.m. at Brick Breeden Fieldhouse in Bozeman.