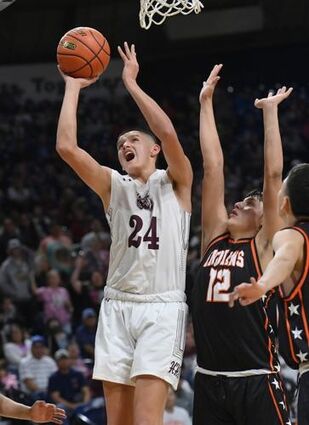 Harlem's Caleb Cole goes to the basket against Lodge Grass in the Class B State Tournament semifinal Friday night at Brick Breeden Fieldhouse in Bozeman. The Harlem Wildcats defeated the two-time defending state champions, 69-67, to advance to the state title game. But Harlem lost, 72-57, to Three Forks in the championship game Saturday night.

The Harlem boys basketball team had quite the season. The Wildcats made their return to the state tournament after not making it in 15 years and even won their first two games in Bozeman this past weekend. While the year ended with a 72-57 loss to Three Forks in the Class B State Tournament championship game Saturday night, the Wildcats finished second for their best placement in years.

The Wildcats faced much adversity throughout the year. Through the first three-quarters of the season, Harlem dealt with injuries and illness, preventing the team from reaching its full potential during th...