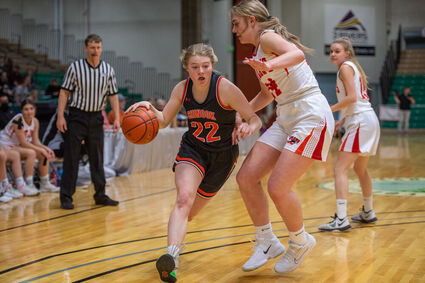 Chinook's Hallie Niebauer dribbles the ball against Roy-Winifred at the Northern C Divisionals at Four Seasons Arena in Great Falls last month. For her sophomore season for the Sugarbeeters, Niebauer earned Class C All-State and District 9C All-Conference honors. Niebauer was one of six players from the 9C to be named all-state this year along with CJI's Tatum Hull, North Star's Laynie Sattoriva, Fort Benton's Ashlee Wang and Box Elder's Kyla Momberg and Angela Gopher.

At the end of another high school girls basketball season, it is time to recognize the best that the Hi-Line had to offer this past season. It was a competitive year in District 9C with many players having stellar seasons to earn themselves honors on the Class C All-State team and the District 9C All-Conference team to end the year.

The Box Elder girls basketball program had a great season with a District 9C tournament championship as well as a second-place finish in both the Class C State Tournament and the Northern C Divisional Tournament.

The Bears had many players have great years t...