Skylights land outside hitter from Calgary 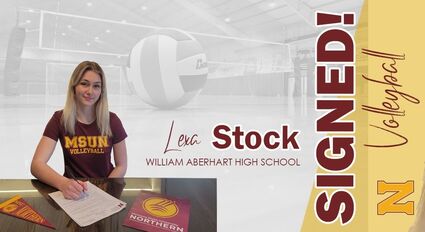 The Montana State University-Northern Skylights continue to build for an exciting future volleyball.

“I'm very excited to have Lexa joining our program,” said coach Wagner. “Her character, work ethic, and integrity will fit in perfectly with our returning and other incoming players.”

Stock is a 5-foot-11 outside hitter from Calgary, Alberta. This season her team went 11-0 and won cities undefeated. They also came in third at provincials. Stocked was team MVP in 2019 and 2021.

“Her experience and physicality are going to allow her to be successful at this level. Lexa matches up great academically as she will be pursuing a degree in integrated health sciences and education here at MSU-Northern.”

Stock will be studying integrated health science, while playing volleyball. She is the daughter of Nikki Markowsky.

When asked why she chose Northern she replied, “I’ve always wanted to play volleyball in the states and when I came in contact with Jerry, he was super nice and knew what he was talking about,” said Stock. “The academics at MSU-N are exactly what I was looking for which is the most important part to me. The campus is beautiful and it isn't a huge school so the professors and other staff can have better relationships with the students which I admire a lot. The volleyball team is strong as well as super nice and supportive and I believe I fit well into that group of girls as well.”