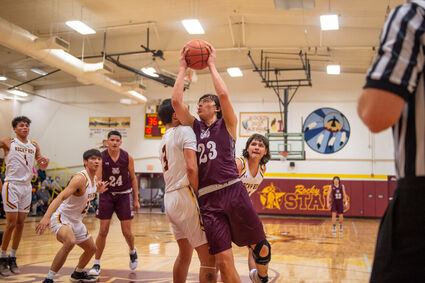 Harlem's Tyler Cichosz, right, looks to shoot during a Class B game against Rocky Boy in January. The Harlem boys and girls teams had a combined three All-State players this year.

The postseason was a magical one for the Harlem boys and girls basketball teams, as both reached last week's Class B State Tournament.

The Harlem boys wound up finishing second, with a battle against Three Forks in the state championship game Saturday night.

Harlem players were honored for their season with the release of the District 2B Boys All-Conference Team. On the First Team were senior standouts Tyler Cichosz and R.J. Ramone, as well as fellow senior Daniel Lawrence. Cichosz and Ramone were also named Class B All-State. Caleb Cole was also selected Second-Team All-Conference for th...