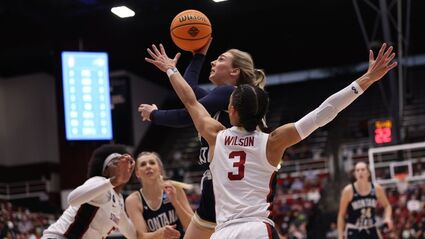 Montana State's Ashley Van Winkle takes a shot against Stanford in the first round of the NCAA Women's Basketball Tournament on Friday. Against the no. 1 seed Cardinal, the Bobcats' season came to an end with a 78-37 loss.

The top-seeded Cardinal led MSU 20-0 after the first quarter then Hannah Jump hit a three-pointer to open the second quarter before Bobcat forward Taylor Janssen's jumper got the Bobcats on the board. At that point the Bobcats were shooting 1-22 from the floor while Stanford was 7-15.

"It was, honestly, really relieving because we were like, we finally got on the board," Janssen said of watching her...