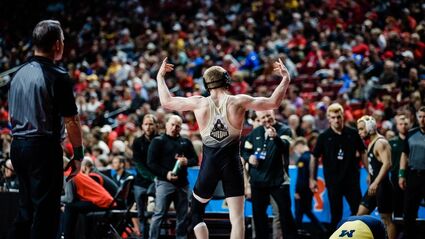 Purdue's Parker Filius wins a match during this season. Filius went 1-2 at the NCAA championships last weekend in Detroit.

It was another successful season for former Havre Blue Pony Parker Filius.

Wrestling as a senior for the Purdue Boilermakers, Filius went 1-2 at the NCAA national championships last weekend in Detroit.

Fillies, who took eighth at the Big Ten Championships, earned his third straight berth to the national tournament, and opened the 141-pound bracket with a victory of No. 20 seed Ian Parker of Iowa State. Fillies won by major decision, 13-5 to advance to the second round, where he dropped an 8-0 major decision to Real Woods of Stanford. Woods was the No. 4 seed in the bracket.