Area could take advantage of online work and low housing prices, one suggests 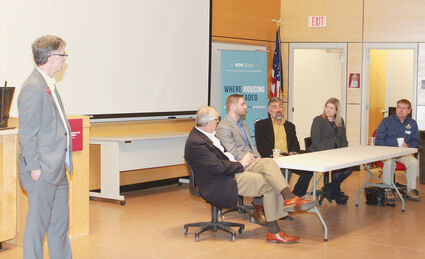 A panel of experts talked about local economic issues during a discussion last week at the end of the Economic Outlook Seminar 2022 put on by University of Montana's Bureau of Business and Economic Research, with two issues becoming intertwined - housing and remote work.

Tuss, also a Democratic candidate in the race for Montana House District 28 faceing Rep. Ed Hill, R-Havre, in the general election, fielded a question on how Havre and the surrounding area could capitalize on outside money coming into the state to areas like Bozeman, Billings, Kalispell and Missoula.

"I don't know if there's a great answer," he said. "It's a very good question.

"The truth is, Bozeman, Kalispell, Missoula, they're going to have more economic development, economic growth, by the time I get done with breakfast in the morning than we're going to have all year... it's just the nature of the beast," he added. "I don't know what the answer is."

Barkey agreed. He said a lot of people have made a lot of money writing books saying how communities should attract workers, business and economic development - "And not one of them has the same answer.

" ... It's a very difficult question and I will never figure out the answer to it," he added.

Tuss said while this region does not have the boom economy of some parts of the state, that is not always bad - these areas also are more likely to see a bust.

"Sometimes we're jealous when it happens there because of highs they experience when they have highs, but we also have a very stable economy. ...Sometimes you see those things happening in Bozeman or Kalispell up here but two years later they're down here while were still up here.

And that discussion also tied into remote work done online and housing prices in the area.

The group discussed housing prices rising rapidly in those areas with high growth, with panel members saying they don't think it will lead to a housing bust like what started the Great Recession in 2008.

They said people buying houses - and driving up prices - in places like Bozeman, Billings, Missoula and the Flathead Valley generally are selling high-priced homes in places like California or New York and then paying high prices in Montana.

The mortgage situation actually is in good shape, Barkey and Sonora said, unlike in 2008, although it is making it difficult for first-time homebuyers.

Henderson said this part of Montana could take advantage of that, especially with more and more businesses letting people work remotely.

"As I'm traveling the state, I'm meeting the people who got priced out of Missoula and Bozeman and bought a house someplace more affordable, so its benefiting Great Falls, Helena, Butte and it could benefit Havre, too," she said. "if you're housing price is $200,000 or less, you can't find a house for that price in those places.

"A lot of folks have left your communities who would be willing to come home as they weight these different options," she added, "well, I could rent forever or I could have a home in Havre again - have a nice house, be around my family again, have help with my kids."

She said the trend on remote work makes that an option as long as the community has broadband, and rural areas often have an advantage there due to work by cooperatives.

She said earlier she had a meeting the night before, Tuesday of last week, with local people involved in the high-tech industry, and they said rural coverage for broadband is good.

"A lot of rural towns, because of cooperatives, it's better than it is in downtown Missoula or Bozeman in a lot of cases, and you're ... at your ranch or a smaller town. I think it's an opportunity that way."

Schumacher said that is happening with MSU Extension. MSU was having troubles attracting people to Bozeman, so they made location optional for one Extension position, and it is now filled by a Chouteau resident.

Extension did a search for the director of the 4-H Foundation but couldn't find anyone who would move to Bozeman and made location optional for that position, he said. It now has applicants including one qualified person from The Golden Triangle, he said.

It's one tool MSU, which has a limited budget for staffing, can use, he said. Extension can't add $25,000 to every salary, but optional location is "a tool we're using to try to get the right people on our team."