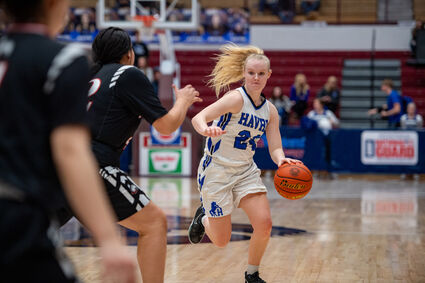 Havre High's Sadie Filius is the newest player to make four straight Havre Daily All Hi-Line Girls Teams. It was a big season for Filius, as she helped the Blue Ponies to another Class A state championship.

What another incredible season it was for girls basketball teams on the Hi-Line.

The Havre Blue Ponies won yet another state championship, while Box Elder played for a state title, and Harlem went all the way to state.

Yes, once again, girls basketball was as good around these parts as anywhere in the state, and that's not going to change anytime soon. Neither will the fact that the Hi-Line and Havre area produces some of the best individual talent around, and this year's Havre Daily News Girls All Hi-Line Team certainly reflects that.

There are eight repeat performers on the All Hi-Line Team, a list that's also represented with all three classifications. There's also 11 seniors on the team, the most any All Hi-Line Girls Team has ever had, and for good measure, there's currently four players who made the list who are heading to play college basketball next fall.

Family is well represented, too. Six players on the All Hi-Line Team this year have older siblings who made previous teams, which is also the most ever.

Filius becomes the newest member to make the All Hi-Line Team four years in a row. She finished her senior season by winning her third state championship, and her fourth Class A All-State honor. Filius' incredible Havre High career is now over, but her basketball career isn't, as she's off to play for Carroll College starting next fall.

Trottier is making her third straight appearance on the All Hi-Line Team. In her final season as a Wildcat, she averaged 22 points per game, while helping Harlem to trophies at the Northern B and District 2B, as well as a win at the state tournament earlier this month. Trottier is a three-time Class B All-State selection, who also stands out running both cross country and track. She's set to play for MSU-Northern and head coach Chris Mouat next fall.

Momberg is on the All Hi-Line Team for a third time, and would have been a fourth had she not moved to Spokane for her sophomore season. A dominant player for the Bears, she's a three-time All-State selection, who will join her sister Joelnell at Montana Western next fall.

Wendland is on the All Hi-Line Team for the third straight year, and she is the first local player to make the list for two different schools. Wendland came to Havre after starring for North Star for three season, and she helped lift the Ponies to a state championship. Wendland also earned Class A All-State honors this season, while helping the Blue Ponies reach new heights in volleyball back in the fall.

The high-scoring Sattoriva makes her second straight All Hi-Line Team. This past season, she averaged 17 points and seven rebounds per game for the Knights, while earning All 9C/Northern C honors for the second year in a row.

Carlson is now a two-time All Hi-Line performer. The steady guard for the Blue Ponies had a great season, both offensively and defensively. A double-digit scorer, Carlson earned Class A All-State honors again this season and has now played on state championship teams two of the last three seasons. Carlson is also a key player for the Havre High volleyball and softball teams.

Neibauer returns to the All Hi-Line Team as a sophomore. She's a 20-point scorer who helped the Sugarbeeters return to the Northern C for the first time in several years, and she's on track to earn All Hi-Line honors all four years of her career.

The fourth Blue Pony to make the All Hi-Line Team for the second year in a row, Miller is now a two-time selection. Nearly averaging a double-double, Miller, who is also an All-Stater in volleyball, did the same in hoops again this season.

A reserve on Fort Benton's 2021 state championship team, Wang stepped into a key starting role this season, and helped lead the Longhorns all the way back to the Northern C. A great volleyball player as well, Wang earned All 9C honors in basketball this winter.

A second Box Elder standout to make the All Hi-Line Team, Gopher had a great season for the Bears, not only helping them to the 9C title, but getting all the way to the state championship game. Gopher earned all 9C honors for the second year in a row for her efforts.

In what many thought would be a rebuilding year, the Longhorns persevered, and Kalanick was a big reason why. Averaging in double figures, she too helped Fort Benton make it all the way to the Northern C consolation game, while earning 9C honors. 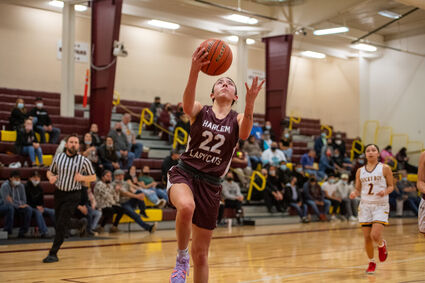 Harlem's Taya Trottier is now a three-time selection to the All Hi-Line Team. She's also staying local, as she's signed to play for Montana State University-Northern next fall.

For the second straight season, all five Havre High starters were named to the All Hi-Line Team. Preeshl emerged as a key piece for the Blue Ponies during the second half of the season, a and went on to earn Northeast A All-Conference honors in her final year at Havre High.

Editor's Note: The All Hi-Line Team is selected from votes by available area coaches, as well as the Havre Daily News Sports Staff. The list does not reflect the opinion of any single individual.