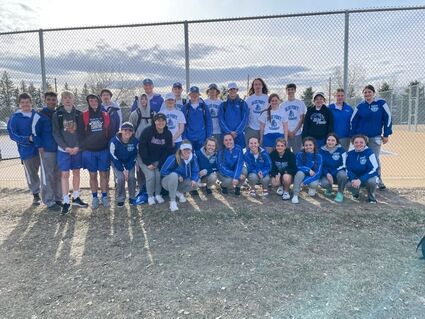 The Havre High boys and girls tennis teams pose for a photo after completing the 2022 Cut Bank Invitational Saturday evening in Cut Bank. The Ponies opened their season with plenty of champions and placers at the Cut Bank Invite. Havre is just two weeks away from hosting the two-day Havre Invitational.

The first meet of a new season is always an exciting time for Havre High head tennis coach George Ferguson. And as usual, his Blue Ponies made the most of the season-opening Cut Bank Invitational.

The Havre boys and girls combined for three individual titles, and eight different places in Cut Bank Saturday, but more important to Ferguson was how his teams played.

"I was really excited about the overall way we played in Cut Bank," Ferguson said. "We asked the kids to go down there and put in the effort, and just make sure they played their best, and they did that. I really thought they a...