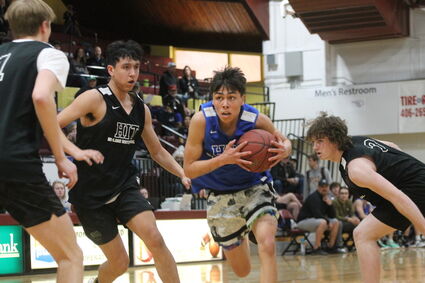 Rocky Boy's Joe Demontiney drives ball in a game at the HIT Tournament at Armory Gymnasium this past weekend. The Class A team, led by Havre High head coach Walynn Burgess, finished first in the tournament.

The HIT boys basketball tournament made its return to the Armory Gymnasium on the Montana State University-Northern campus this past weekend. It was a great three days of basketball with the best high school players in the state competing against one another. But at the end of Saturday night, it was the Class A boys team with the tournament championship after defeating the Class AA team, 109-83, in the title game.

"It's awesome," Class A and Havre High head coach Walynn Burgess said about winning the tournament. "This group is just different. They came in and they all cheered for each oth...