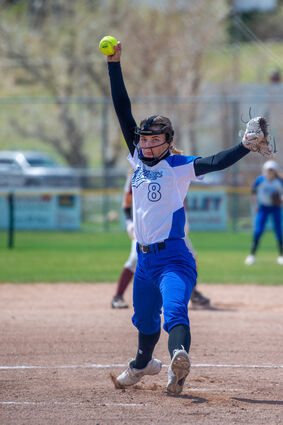 Havre's Avery Carlson pitches against Sidney last season at Sixth Avenue Memorial Field. After helping the Havre High girls basketball team win another Class A state title this past season, Carlson hopes to step up as the new number one pitcher for the Havre High softball team this spring.

At the end of the Havre High girls basketball season, the Blue Ponies once again found themselves as the Class A state champions. Junior Avery Carlson was a key force on the championship run as a starter and an All-State player for the Ponies.

Now however, as the HHS softball season begins, Carlson hopes to carry that success onto the diamond.

This season, Carlson will look to step up to become the primary pitcher for the Ponies. Carlson served as the No. 2 pitch...