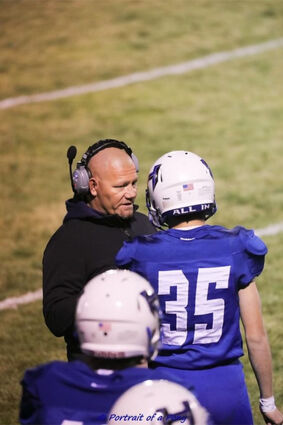 Jake Eldridge speaks to a player at a Havre High football game at Blue Pony Stadium last fall. After serving as the defensive coordinator for the Blue Ponies last season, Eldridge will take over as the new head coach for the HHS football team starting this fall. Other prior coaching experience that Eldridge has had includes serving as the running backs coach and defensive coordinator at Montana State University-Northern under head coach Mark Samson. He also served as the football coach at Box Elder.

The Havre High football team will have a different look come this fall. That's because the Blue Ponies plan on heading in a new direction. This upcoming season, Jake Eldridge will take over the head coaching duties for the Blue Ponies and he is looking forward to the opportunity to build the program into a contender.

"I'm super excited," Eldridge who was officially hired last month, said. "It's something that I've always wanted to do. To have the ability to be able to grow a program and put things together the way that I think will help make it successful."