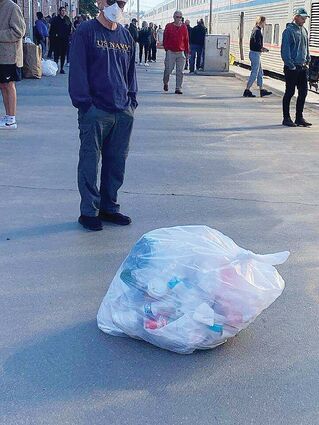 A bag of trash lies in front of a man outside of the Amtrak station Friday morning. Marc Magliari of Amtrak said one of the part-time station attendants was ill Thursday and Friday and personell on the train unloaded the trash, not realizing no one was there to deal with it. The trash was taken care of Friday afternoon, Magliari said.

Havre Daily News received multiple reports Friday of trash being piled and left on the Amtrak station platform Thursday and Friday, and that the station wasn't even open part of the time, a report an Amtrak spokesperson said was due to illness leaving the station unstaffed.

Marc Magliari of Amtrak said one of the part-time station attendants was ill and unable to get to work, but the personnel on the Empire Builder Thursday did not know that and unloaded the trash as usual. With no one there to deal with it, it remained there until an attendant came on shift Friday and removed the trash.

Coverage was mandated by Congress following the passenger rail service cutting ticket agents at 16 stations. Congress ordered Amtrak in 2019 to restore customer service agents, including selling tickets, to stations with ticket agents cut in 2018 that average at least 25 passengers a day.

Magliari said the agents provide the services the ticket agents did before the positions were cut in 2018, although he was not sure if they could accept cash for tickets at this point.

"Doesn't cast the city of Havre in a good light, but it says more about the incompetence at Amtrak," Meyer said.

He said when Congress mandated the stations that average at least 25 passengers a day having agents, Amtrak only partially responded. 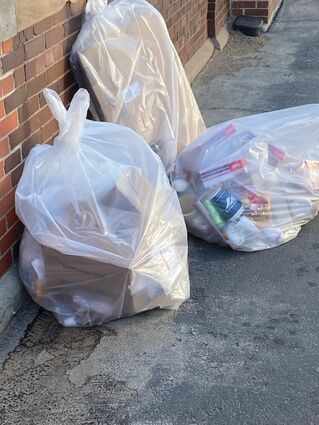 "They just hired part-time help and the 'agents' are not able to sell tickets," Meyer said. "Staffing at Havre is supposed to be two part-time people, one working four days per week and one working three with both people working five hours a day. Of course, not being full-time employees makes finding competent help all the more difficult."

Magliari also said another issue - the train not running every day of the week - also is continuing for the time being, due to a shortage of workers.

"Despite the high pay and the good benefits, we're having a hard time finding people both on operations and on the maintenance side," he said.

He said he could not put a date on when the Empire Builder - Amtrak also has other long-distance trains also running five days a week - will be returning to a seven-day schedule.

He said people who are interested could check out https://careers.amtrak.com .