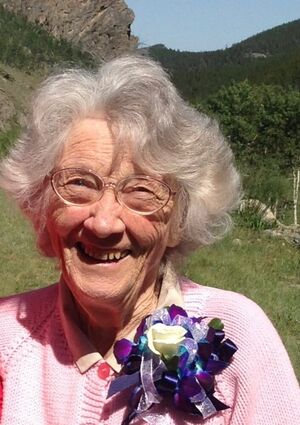 Eileen Augusta Holthe Patrick was born August 6, 1930, to Harold and Irene Laura (Smith) Holthe in Sheyenne, North Dakota. She was born the second child of five children with four brothers. She attended school from first to eighth grade in a one-room school. She earned a bachelor's degree in education at Jamestown College, which her mother, Irene, had also attended a generation before. She played the French horn in the college band.

After graduating, she was hired in 1955 to teach math and physical education in Havre, Montana. She chose to work in Havre because she could travel from New Rockford, North Dakota by train. Miss Holthe would be greeted by prior eighth grade math students and cheerleaders that she coached her whole life.

She married Wayne on May 29, 1961, after meeting him while playing bridge. They lived and farmed north of Hingham and Rudyard near Wayne's brother Clifford and his family. She enjoyed having Uncle Cliff and Aunt Carol's kids over for birthday parties. Eileen and Wayne raised a Christian family, and she was involved at both Goldstone Lutheran north of Rudyard and First Lutheran Church in Havre. She was a Girl Scout leader and volunteered to support the Boy Scouts, too. She emulated the scouting ideals (collecting stamps, sewing, and knitting). She was an avid baker and loved genealogy. She traveled with Lynda and Gladys to Missouri on a fact-finding mission of Patrick heritage. If there was a new baby born, she researched their information as soon as possible and made it a part of her handwritten records.

When her children, Amy Irene, and Ward Donald, reached school age, Wayne and Eileen built a house in Havre so they could attend school there. She obtained her driver's license at this time so she could drive to the farm during the spring and summer.

While living in Havre, Eileen enjoyed helping with community concerts, taking cooking and cake decorating classes, walking to the library, helping at vacation bible school, and playing cribbage and various other games with her children. She loved baking bread and her kids enjoyed the elephant ears she made from leftover bread dough served with butter and honey.