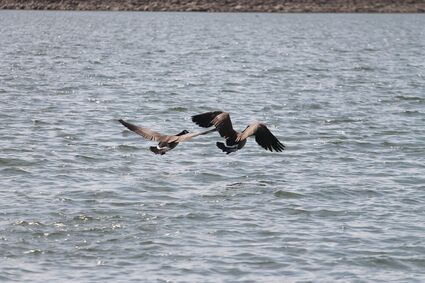 Two geese take off from Beaver Creek Reservoir Monday in springlike weather. Havre recorded a high of 69 degrees Monday. The normal high for April 25 is 61 degrees. The weather is expected to turn colder and wetter later in the week, leading to the organizers of Havre Art Alley Spring Celebration to decide to postpone the event.

The prediction is for recent hot, sunny days to be followed by cooler temperatures and rain, leading to the organizers of an event this weekend to postpone.

Downtown Havre Matters! Art and Beautification Committee and the Hi-Line Arts Council had planned to have Saturday a second Spring Celebration in the Art Alley between Second and Third street, Third and Fourth avenues, but Downtown Havre Matters! member Debbie Vandeberg said they decided this week to postpone.

The forecast, following two weeks with snow in parts of the state, although the heavy snow missed this area, is calling for some major rainstorms.

National Weather Service issued a notice that a spring storm will bring cool weather and wet conditions to the state, mainly rain in the lower elevations but snow is possible especially during the overnight hours.

The rain in this area is expected to trickle off by Saturday.

Vandeberg said said the groups hope to hold the celebration in early June instead, possibly the first weekend of that month.

"Please stay tuned for more details on the new Spring Celebration date and schedule of activities," she said.

The Art and Beautification Committee has been, since 2015, working on a goal of revitalizing downtown Havre by adding colorful art through multiple mediums to enhance the downtown core.

The plan included lighting, public art and beautification in the alleyway now known as Art Alley. The first project completed was lighting the alley between Third and Fourth avenues.

Last spring, the Hi-Line Arts Council and the Art and Beautification Committee put together the first Spring Celebration event.

This year's celebration is planned to have much the same focus, showcasing a variety of art mediums including local artists, an art project for children, musicians, food trucks and more.

More is being done and is planned for the alley in the future.

Since spring of last year, the dumpster on the Third Avenue end of the alley became a mural of sunflowers over the summer months. This summer, work will begin transforming the back doors of several businesses that line the alley into works of art. A mural project is also in the works, along with signage welcoming folks to the Art Alley.