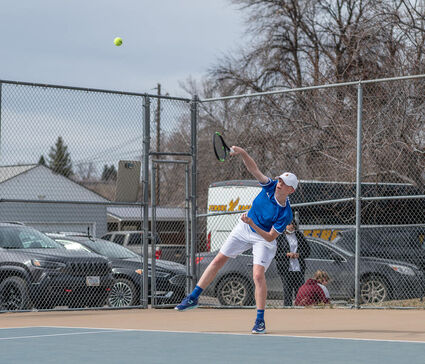 The weather managed to cooperate, and while the competition was as good as the Havre High tennis teams have seen all season long, the Blue Ponies got exactly what they were looking for Tuesday in Great Falls.

Havre traveled to the Electric City for duals against Great Falls Central, GFH and CMR, and HHS head coach George Ferguson couldn't have been more pleased with his teams.

"The goal going in was to build off what we did last weekend in Hardin," Ferguson said. "We said we didn't want to take any steps back. And the kids met those goals and then some in Great Falls. I thought we played really well against really strong competition. So it was a great day for both our teams."

After an impromptu dual against GFCC in the morning, the Havre girls battled Class AA Great Falls High to a 4-4 draw in the afternoon, before falling to powerhouse CMR, 6-1. Against the Bison, Rayna Johnson and Grace Crantz led the way in singles, while Courtney Burchard and Chloe Bricker and Claudia Ucin and Tonya Ralph won in doubles to give the Ponies a split. Ucin and Ralph also won a tiebreaker against CMR for Havre's lone win against the Rustlers.

"Our girls played awesome," Ferguson said. "They really raised their level of play. Both teams, but especially CMR, were as food as we're going to see this season, and our girls held their own. It's just another sign of the improvements our girls continue to make and I'm really proud of them."

The Havre boys dominated GFH in the afternoon, with a 6-2 victory, before falling in a tough dual to the Rustlers to end the day. Top singles player Josh Currie was his dominant self with two wins at No. 1, while the Havre doubles teams of Trenton Maloughney/Caleb Spangler, Carter Spangler/Theron Peterson, Collin Miller/Conner McKay and Reid Kato and Tre Gary swept the Bison. Matt Huse also got a victory in singles. Against the Rustlers, Jared Rosgaard also garnered a big win at No. 2 singles, while Kato and Gary closed the dual with a tiebreaker win over CMR.

"Our boys also took it up a notch," Ferguson said. "They played some really good tennis. It was a great dual against CMR. They have a really good team this season. So to play that level of competition, and play as well as we did, that was fun to see."

Havre now has to get right back on the road to head to the Elks Invitational in Glendive on Thursday. Like last week, the tournament was moved up a day because of yet another spring storm approaching Montana.

"This is a tough stretch for our kids," Ferguson said. "The weather just continues to fight us, but our kids are doing a great job of handling it. They're working really hard in school which always comes first, and they're doing what they're supposed to do on the tennis court. They are battling and working towards getting better, and that's the goal. I'm proud of the progress they made on Tuesday, and I know they'll move forward this weekend in Glendive."