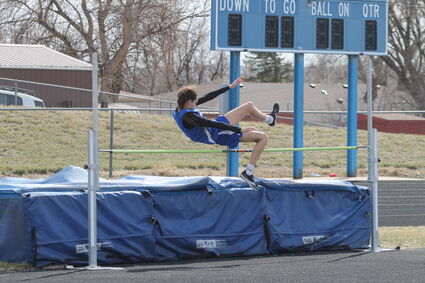 Havre's Tierra Parker jumps at the Havre Lions Invite at the Havre Middle School Track earlier this month. The Havre High track and field teams head on the road to compete in the Whitefish ARM Invitational this Saturday.

The Havre High track and field teams just competed in the Cal Wearley Memorial at home Tuesday, but they have little rest this week. This Saturday, the Blue Ponies look to keep things rolling as they will compete in the Whitefish ARM Invitational.

HHS head coach Kari Filius looks forward to returning to the Whitefish meet. It had been several years since the Ponies had competed in the meet and the Ponies will get to compete against Class A schools this weekend.

"It's a great competition against A schools," Filius said. "It's not supposed to be windy so we should get some good PRs and some good performances and (we should) be pushed."

On Saturday, the Ponies will compete against schools such as Bigfork, Browning, Columbia Falls, Polson, St. Regis, Thompson Falls, Troy, Heart Butte, Hot Springs, Libby, Plains and Whitefish. Heading into Saturday, Filius believes Whitefish, Columbia Falls and Polson should provide the toughest competition. The Ponies have mostly competed against Class B and Class C schools this season, so Filius looks forward to seeing how her team competes this weekend.

"We're ready to see where we are. I think we're pretty prepared," Filius said.

Several Ponies will look to continue their strong years for the program. In all four meets this season, freshman Kaydance Reiter has taken first in the 100-meter dash and the 200-meter sprint. In the 100, she has a personal record of 13.25 and in the 200, she has a best of 27.28.

With inclement weather forcing several meets to be rescheduled, the Whitefish meet will be the second meet for the Ponies this week. After a good showing at the Cal Wearley Memorial, Filius knows that rest and proper conditioning will be crucial if the Ponies want to carry over their success into this weekend's meet.

"We'll have to take some recovery days," Filius said. "We'll come up and do some recovery workouts in the next couple days and then maybe one more short speed workout and then we'll travel."

The HHS track teams will head on the road to compete in the Whitefish ARM Invitational this Saturday.