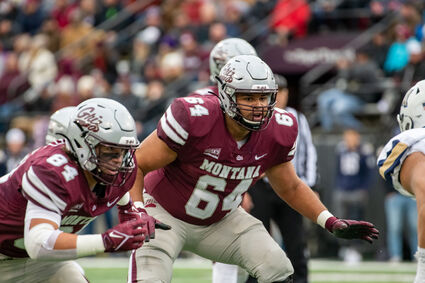 University of Montana's Dylan Cook plays in last November's Brawl of the Wild in Missoula. Cook signed with the Tampa Bay Buccaneers last weekend. He played two seasons at MSU-Northern.

Former Montana State University-Northern quarterback Dylan Cook is heading to the NFL - as an offensive linemen.

Cook came to Northern out of Butte High School as a highly-touted quarterback. He battled for the starting job at Northern for two seasons while also competing as a long-snapper for the Lights.

Cook left Havre after two seasons and accepted a walk-on spot at Montana. He had to sit out one year because of transfer rules but still impressed the coaches enough to earn a scholarship before playi...