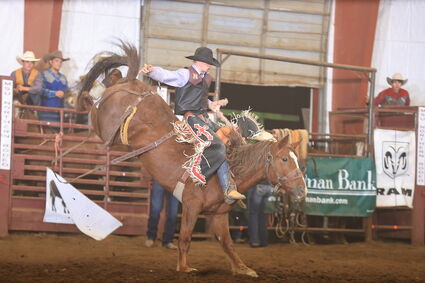 Over the course of the spring portion of their schedule, the Montana State University-Northern rodeo teams have been working toward the end of the season. This past weekend in Missoula, the MSU-N rodeo teams competed in a rodeo hosted by the University of Montana.

In their penultimate rodeo of the regular season, the MSU-N rodeo teams had strong performances with the MSU-N women's team taking first in its rodeo while the MSU-N men's team placed third. With it being late in the season, this is what MSU-N head coach Doug Kallenberger was hoping to see.

"They were amazing this weekend," Kallenberger said. "The group that I'm seeing now has nerves of steel and they're extremely prepared."

Mikenna Schauer had an excellent performance in the rodeo as she scored 210 points to be named the women's all-around winner. She was first in average in breakaway roping with a time of 5.3. She took first in the long go and took second in the short round in the event. She also placed seventh in goat tying with an average of 20.5 In goat tying, she took third in the long go and she took seventh in the short round.

Kassidy Williamson continued to compete well in breakaway roping as she recorded an average of 6.1 to finish second. In the long go, she took eighth and in the short round, she placed first.

Jill Marcenko had another strong weekend for MSU-N as she took sixth in goat tying with an average of 18.6. In the event, she took eighth in the long go and she took fourth in the short round.

Another cowgirl with a strong showing in Missoula was Brittney Cox. In barrel racing, she took fifth with an average of 35.66. In the event, she placed second in the long go.

The MSU-N men's team also had a good weekend with 400 points to finish third in its rodeo. MSU took first in the men's rodeo with 750 points while Northwest College took second.

Garrett Cunningham had another strong performance for MSU-N. In saddle bronc riding, he took first with an average of 112 points. In the event, he finished third in the long go and he took first in the short round.

As they prepare for the final rodeo of the regular season, the MSU-N riders are in good shape. Schauer and Cunningham have already mathematically clinched the Big Sky region championships for their events for the season.

The MSU-N women's team is in second place in the Big Sky regional standings. If they perform well in their final rodeo this weekend, they should maintain their standing and qualify for this season's College National Finals Rodeo in Casper, Wyoming, is June. However, Kallenberger knows it is still possible for Montana Western to catch up, so he wants his cowgirls to continue competing hard this weekend.

"We're not comfortable. We can still be caught," Kallenberger said. "We'll just keep playing it by ear and see how it goes."

The MSU-N rodeo teams will wrap up the regular season this weekend as they head on the road for a rodeo hosted by Miles City Community College.