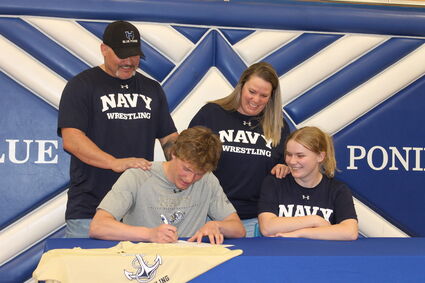 With his family, Havre's Orion Thivierge signs his letter of intent to join the wrestling program for the United States Naval Academy. He chose Navy over Montana State University-Northern.

One of the most distinguished wrestlers in recent memory for Havre High School has finally made his decision. On Wednesday afternoon, Havre's Orion Thivierge announced he would be signing with the United States Naval Academy wrestling program. After months of deliberation, Thivierge was happy to finally announce his decision to the public.

"It's pretty awesome for it to be official," Thivierge said. "It's a lot of stress off my shoulders and I just feel it's a good thing to have it done."

But it was not an easy decision for the Havre native. The choice came down to Navy and the Montana S...