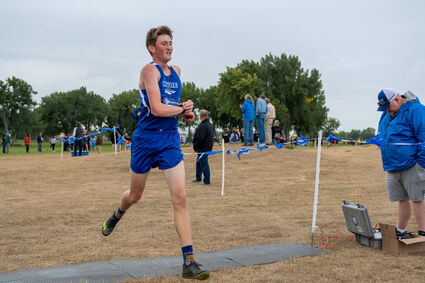 Havre's Brody Henry runs in a cross country meet last fall. This spring, Henry has continued to run as a member of the HHS track and field team. Over the season, he has competed in the 800-meter dash, the 1,600, the 3,200 and the 1,600 relay. With the regular season now over, Henry hopes to perform well in the 800 and the 1,600 at the Eastern A Divisionals in Lockwood this weekend in order to qualify for the state meet for the second straight season.

The postseason has arrived for the Havre High track and field teams as they will compete in the Eastern A Divisional this weekend. Many Blue Ponies will be looking to convert their regular season success into postseason success, including runner Brody Henry.

"I'm looking forward to hopefully getting on the podium at divisionals," Henry said. "(I look to) PR in the 800 and the mile, hopefully break 4:40 in the mile. That'd be really cool."