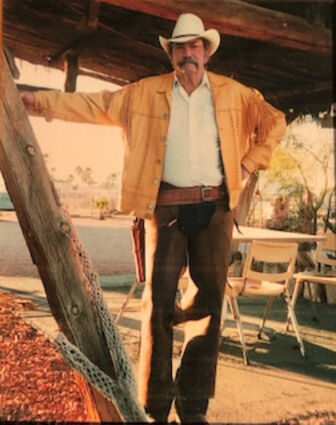 Billy Burton Groseclose was born January 12, 1935, in Wytheville, VA to Edgar and Glady Sexton Groseclose. Bill was raised in Rural Retreat, VA, near Crocket, VA, with his many siblings.

In 1949, Bill moved to Havre, Montana to live with his sister Hazel and her husband, Warren Grubb. Bill went to work on the Great Northern Railroad for five or six years as a laborer in the diesel shop. Here he met his loving wife, Avis Powell, and they were married in November 1955. Later, he was injured and had to leave the railroad. Subsequently, as he recovered, he worked for the Montana State Highway Department until he found his true calling in road construction with Baltrusch Construction. He and Baltrusch spent several years together as Bill worked on road construction jobs all over Montana.

In early 1964, Bill and family moved to Hamilton, MT, where he continued in construction. A couple of years later, Bill went to work with Davison-Runyan in Idaho and moved the family to Bonners Ferry, ID. In addition to his full-time job, Bill and Avis purchased an 80-acre farm where they raised, cattle, horses' alfalfa hay. In 1985, after too many years in the bitter winters of Montana and Idaho, warmer weather beckoned Bill and Avis to Harquahala, AZ.

Bill eventually found himself again in construction with Ames Construction, which was not only a working relationship but a long-term friendship with John Ames. Working for another company, Bill suffered a serious back injury leading to his retirement in 1990. However, Bill never really retired! He started his own business, generally related to road work, until his health demanded a full retirement, though never truly retired, he puttered away on everything, mechanics, home remodeling, and whatever needed doing. He puttered every day on something, right up to his very last day with us.

Bill leaves behind the love of his life, Avis, wife and companion of over 66 years. They did everything together; from raising kids to hunting and camping and a variety of other pursuits.

He was preceded in death by his parents and all 10 of his siblings. He also lost his special daughter Lisa Renee and son Wayne Richardson in the last few years. Both deaths were devastating to him. Not one to show emotion, he was deeply troubled by the losses of his children.

Also surviving are 18 grandchildren and over 50 great- and great-great grandchildren, plus several nieces and nephews. He loved each member of his family, though sometimes slow to show it. Regardless, he will be missed by all, always.