For the love of the court 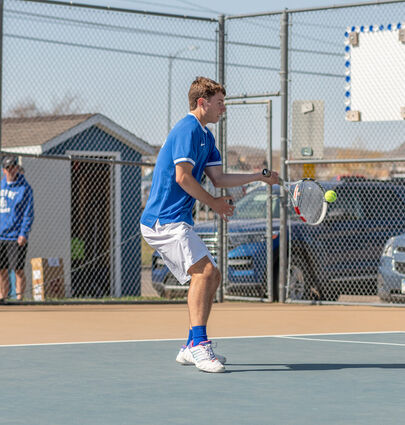 Josh Currie hits the ball earlier this month. This weekend, Currie will compete for the last time for the Blue Ponies at the Class A State meet.

Sports attract athletes for many different reasons. Some play out of a competitive drive and just want to win. Some play just to keep themselves in shape. But many play just because of their love of the game.

After joining the Havre High tennis program his freshman season, Josh Currie quickly found a love for the game. Since the first time he picked up a tennis racket, he has made a new home on the tennis court.

"I just think it's a really fun sport," Currie said. "Whether I win a point, lose a point, I just think that everything about the sport itself is really fun."

Currie's love for the sport has only grown over the years, which resulted in him becoming a better player for the Blue Ponies. If it was not for his love of the game, Currie would not have spent so much time on the court and improved as a player.

"I feel like I fall in love with it more and more every single day that I play," Currie said. "Just anytime I have a tennis racket in my hand, I feel like I'm having a lot of fun and it makes me want to play more and more each time I play."

Currie has become one of the best tennis players for the Ponies during his time in the program. He started his career strong as he made the divisional team as a freshman and scored three points. After the 2020 season was canceled, he finished second in both the Northeast A divisional and State A tournament as a junior. His career accomplishments have not gone unnoticed by his coaches.

"Josh is a very good player," HHS head coach George Ferguson said. "He's really taken his style of play and made himself into a guy that's just incredibly hard to beat. He just battles and battles. It's machine-like. It's just an extremely tough style to play against, let alone have success against.

"So with his style, and his incredible work ethic, he's had one heck of a career so far," Ferguson said. "He's just a super-hard worker, he's incredibly coachable, and he's just a great kid in general. And that all adds up to someone I feel very fortunate to have had the opportunity to coach all these years."

Currie would not have become the player he is without his dedication to the game. He would often go to the tennis courts at night after practice to get some more swings in. Even when he is participating in other sports during the fall and winter, he would use his free time to get to the courts and practice some more. When he is at practice, he goes 100 percent.

"Nothing comes easy," Currie said. "Every ball I hit, I hit it as if it's the last ball I'm going to hit so I'm just trying to get better every time I step on the tennis court."

Ferguson and Currie often play against each other in one-on-one matches late into the night. Neither of them let up so Currie believes playing with Ferguson also helped him become a successful player for the Ponies.

As he has gotten to play with Currie and coach him throughout his career, Ferguson has gotten to see Currie's dedication first hand.

"Josh got the tennis bug as a freshman," Ferguson said. "And it never went away. I've coached hundreds of great players, but very few have spent the amount of time Josh has on our courts. He's there all the time, in the offseason and during the season. He'll hit with anybody. And that dedication and passion for tennis has not only made him the player he is today, but it's also helped so many other kids in our program get better. I am/was a tennis junkie myself. I see a lot of myself in Josh. When I was a high school player, I just couldn't get enough of tennis. So I really appreciate and respect how much Josh loves the sport, and wants to be good at it, and I think because we're so similar, it's formed a pretty awesome bond."

Currie's hard work paid off as he finished second at divisionals and state the next season. After missing his sophomore season, he came into that season determined to make the most out of his time on the tennis court.

"I just went out there and played as hard as I could every match and every point," Currie said. "Late in the year, I just happened to be playing my best tennis at the right time."

Finishing second at state and helping the Ponies win their first state title in 16 years was his favorite moment of his high school career so far. But that success did not stop him from wanting to still improve as a player coming into his senior year.

"I was just hoping to improve a lot on my footwork," Currie said. "So I spent a lot of time in the offseason doing that and coming into this year, the goal was no different. I just wanted to go out there and play my hardest every match and every single point."

His hard work has continued to pay off as Currie has had another stellar season for the Ponies. He has a 35-4 record and has qualified for this weekend's state tournament in Bozeman. With another strong year for the Ponies, Currie credits his mental toughness.

"Mentally I think I'm really strong," Currie said. "You can't be afraid to go out there and lose points. It's impossible to play a perfect tennis match so anytime you make an error, especially in tennis, you have to move on to the next thing."

There are still some hurdles for Currie to overcome this season. If they meet up again, Currie will look to get the best of Dalton Polesky from Miles City. Throughout their careers, the netters have faced off. Last postseason, Polesky defeated Currie twice to win the divisional and the state title in singles. If they meet up for the last time this weekend, Currie knows it would be a great match for the state title.

With the state tournament taking place this weekend, this will be the last time Currie takes the court for the Ponies. As he looks back at his career, Currie has much to be fond of. Along with enjoying the game of tennis, he has enjoyed playing the game with his teammates.

"It's not just tennis itself that's fun, but it's also the guys I'm playing with and my coaches," Currie said.

When he first joined the program as a freshman, it was the first time he picked up a tennis racket. So over the years, he has enjoyed learning more about the sport and becoming a better player.

Once he is done with high school, Currie hopes that tennis can remain an important part of his life. He hopes to attend Spokane Community College in order to play collegiate tennis while also studying sports science. If that does not work out for him, he plans on staying on the Hi-Line to attend Montana State University-Northern. Even if he stays in Havre, tennis will still be in his life.

But for now, Currie is just focusing on this weekend's state tournament. While he has already had a stellar career for the Ponies, there is still a chance to add onto it.

"Josh has already had an incredible career," Ferguson said. "The player he's become, it's remarkable. But I know he's not done. He's got a couple more things he wants to this weekend in Bozeman, and he'll give it everything he's got. One thing's for sure, he's going to pour his heart and soul into this last state tournament. But whatever happens, I just think the world of Josh, and I'll always look back on his career and believe he's one of the best we've had in our program. He's special, he's a great kid, and he's been a great ambassador for our program and for the sport, and that means so much to me. I'm just really proud of him."

As he heads into his final weekend with the Ponies, Currie looks forward to possibly matching up with Polesky for the last time. While he looks forward to one last chance to win a state title, he is also excited to see how his team performs as they try to repeat as state champions.

"I'm looking forward to watching my teammates play and seeing how they handle it," Currie said. "I think we've got a really good team for the state tournament so hopefully everybody does well and we can try to come home with another trophy."